Marker Totes for my Etsy Shop

As I've been working on stocking my Etsy shop, I've really been racking my brain to offer some unique products.  I started with my repurposed vintage pillows.  Now I am working on something pretty different: marker totes.

In 2014, I made my two oldest children these marker totes for Christmas.  I honestly think they were the best handmade gift I have ever given them.  I thought they would be used primarily for church, (during the first hour that is very adult-centered), but they use them everywhere, all the time.  For example, we've brought them to waiting rooms at doctor's offices but the kids often like to simply use them at home too.

When I made them, I didn't enjoy the process.  I was stressed out to be making something without a pattern for sure.  I know some people don't like using patterns but I love using them because they tell me exactly what to do.  I was also stressed because they were very tedious and time consuming to make.  Recently, I decided to revisit these and see if I could make the process easier and I did! 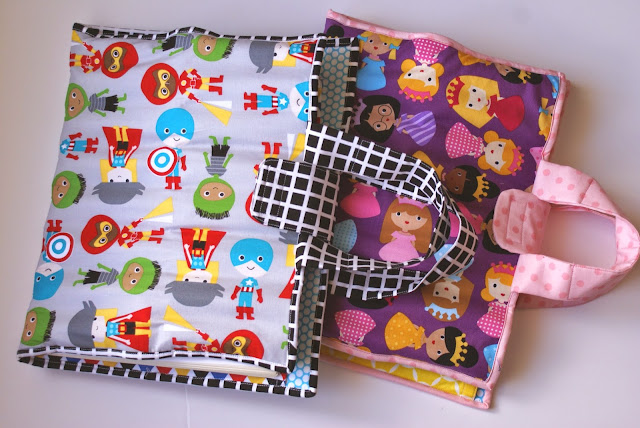 Here's the first one I recently made.  I love this Pandastronaut fabric from Pink Castle Fabrics.  (It's Japanese, and I have a special love for Japanese fabrics!!! Seriously, if I could only sew with Japanese fabrics, I would still be a happy camper).  So, as you can see from this picture, I simplified the construction of the marker tote significantly: I used cotton webbing for the handles instead of making my own (I seam ripped them off of a store bought tote bag I already had), I didn't bind the outside, and I used snaps for the tab closure instead of velcro. 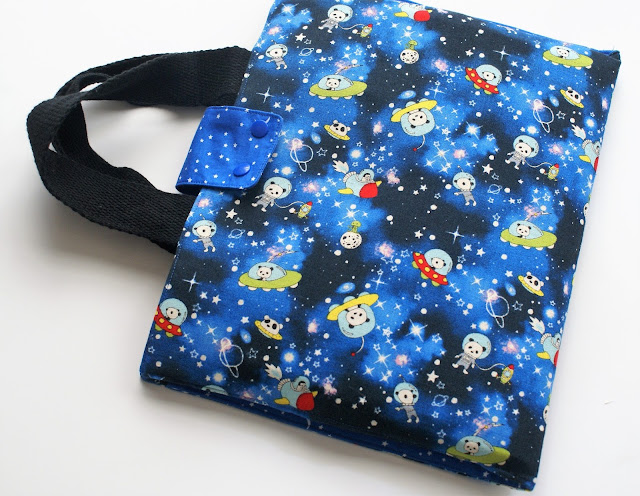 But here's the problem I am dealing with and have not yet solved: when you put the markers into the tote, the tote really gets warped and squeezes in on itself.  This version was especially bad because I used a big piece of peltex to give the tote stability.  It doesn't bother me too much because I made it for my youngest son and I am not a HUGE perfectionist when it comes to items I make for my family.  But if I am going to sell something, I want it to be just right. 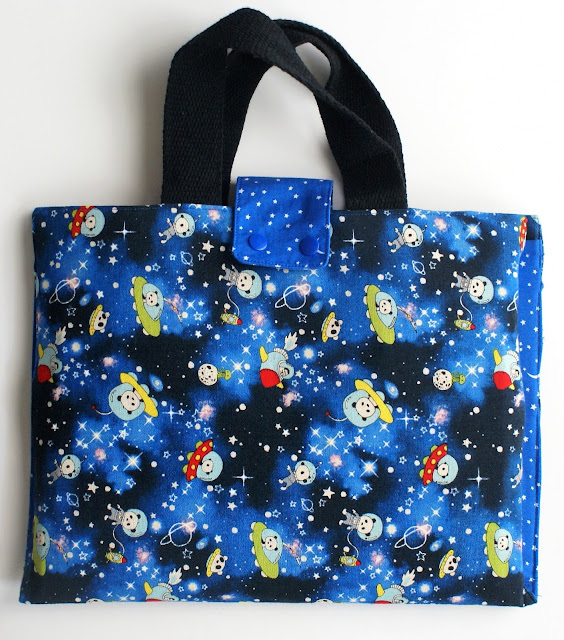 I decided to make another version, this time using Pellon Flex Foam (just like automotive headliner or Soft and Stable) as the main stabilizer for the tote.  It still warps and squeezes in on itself, as you can see: 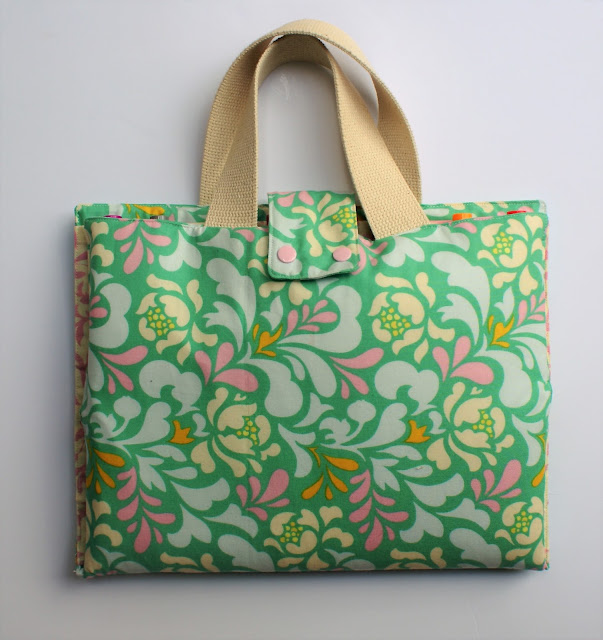 I talked to a talented sewing friend and she gave me some ideas, emphasizing that different interfacing is probably not enough of a change to fix this problem.  I need to change the construction of the marker pockets...... 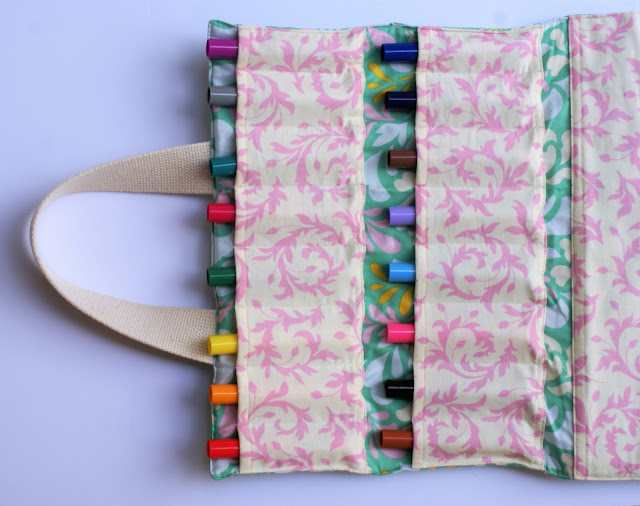 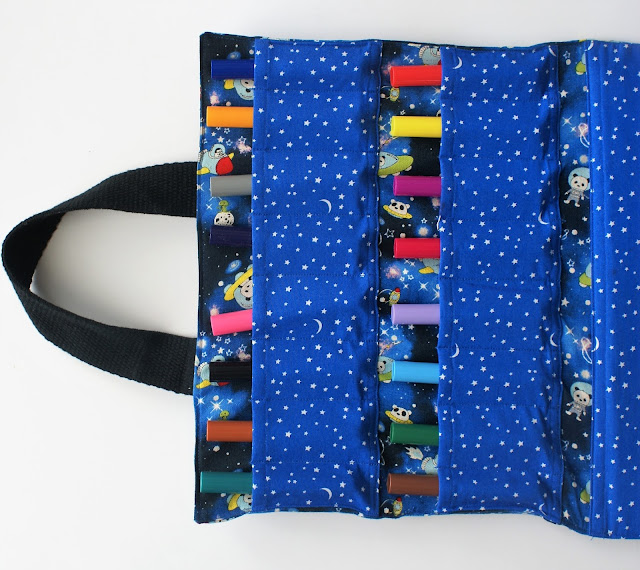 This picture shows the other side of the interior, you can see that pulling on the right- it's so bad! 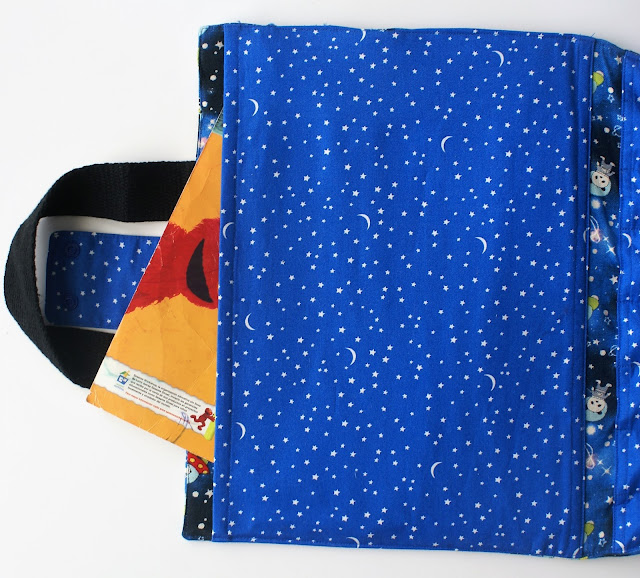 My friend gave me one idea to try and make the pockets as an elastic gathered strip, like in the free Noodlehead pattern: Snappy Mani Pouch.  It's been almost 8 years since I made a pocket like that (for the diaper bag I made to use with my first born), so I decided to do the Mani pattern to relearn.  Here's the outside: 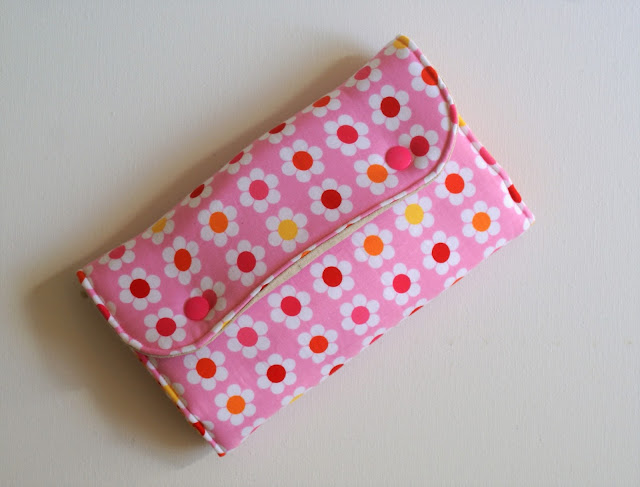 Here's the inside.  Such a cute pattern that I will have to revisit again to make friends gifts.  Making the elastic pocket wasn't too bad but it's definitely not fast, which is definitely a drawback.  If I am gong to make those marker totes over and over for sale, I need to make them very simply and quickly so that I don't have to charge $1,000 for them because they take so much time. 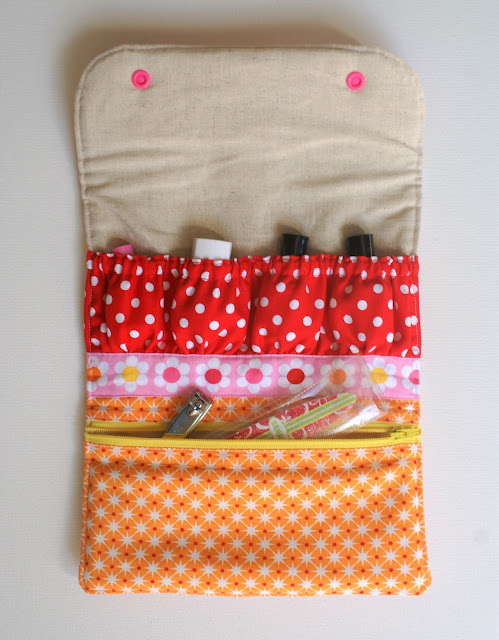 One significant piece of my progress with this project is that I discovered an awesome local resource for cotton webbing.  Believe it or not, I've lived in Colorado Springs for just over 3 years and there was a fabric store I'd never been to until recently.  I just didn't really know about it and none of my sewing friends were very "into" it or encouraging me that I should go... But they have a TON of webbing and their whole store was 25% off over the past 2 weeks, so I went and got a bunch of colors, 18 yards for $21. 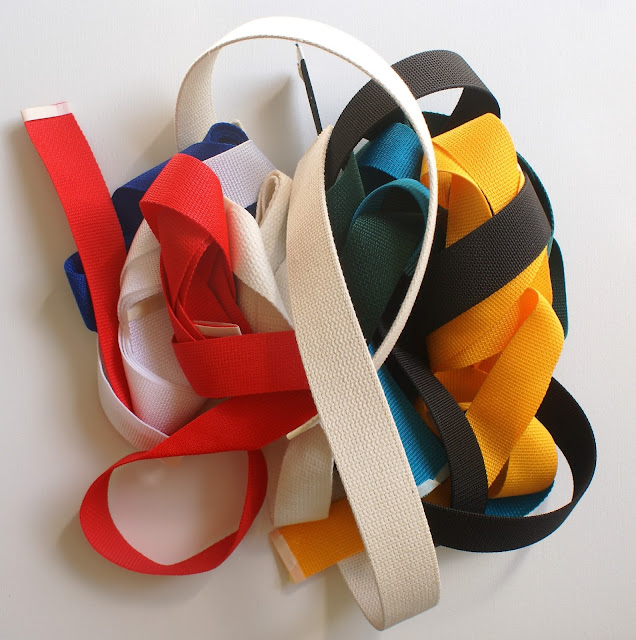 What about elastic thread across the top? I know there's a few garments that use that to do gathers... Or little plackets at the bottom? The main problem is there's not enough room being left for the markers, so if more room is left for the markers, it should solve the problem. Maybe even doing a "quick" simple gather across the bottom piece, then using a marker to indicate where to sew the divisions...