Here's the truth: I think sewing so much for those craft fairs this fall burnt me out a bit.  I haven't been sewing very much lately.  I'm tired.  When I have some spare time, I have preferred to go to bed earlier, read, and watch the occasional Netflix drama.  I'll admit that I feel a little guilty for not churning out lots of sewing projects.  I will say that I am still enjoying the fruits of my craft fair spoils: I bought myself winter boots that actually fit (I've been using a pair of thrifted ones a size too large for years!) with some of my proceeds and I've been using some of my craft fair inventory as gifts to family, friends, and teachers.  It's felt so good to just rifle through all that stuff and pull out something cute and handmade that is ready to go.

So I guess this post is a little overdue, but the night before Thanksgiving, I decided to start a table runner, in hopes of finishing it in time for the next day's meal.  Nick and I reached our ten year anniversary in June, yet we've never had to cook our own Thanksgiving turkey- but this year was the year to finally do it!  Nick took charge of it and my responsibility was potatoes (we had friends over who brought other dishes too).  I didn't feel too bad focusing on this spontaneous idea/project because the meal preparation was minimal for my part. 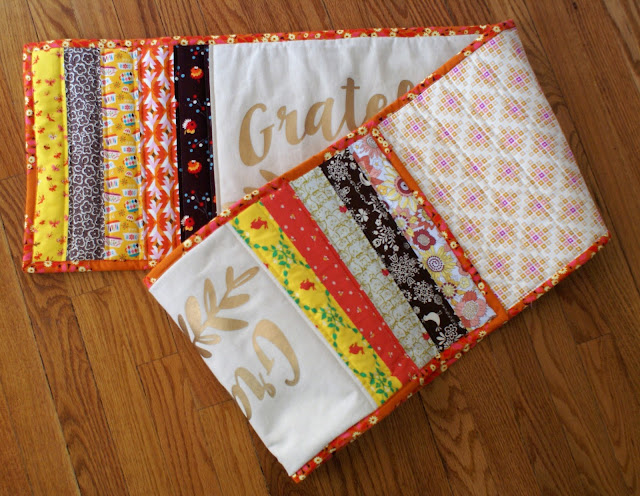 In early November, I spotted these "Grateful" Target placemats in the Dollar Spot (they were actually $3 each).  I decided to use them as the focal points of the runner:

We have a very long table, so this runner was almost two yards long (13" wide).

I had quite a bit of Insul-brite (that batting that is supposed to be great for making pot holders) and pieced together a long piece to use as the top layer as batting (I also added another layer of thin polyester batting as well).  The thickness made it all a little tricky to sew up neatly, but I think I did okay. 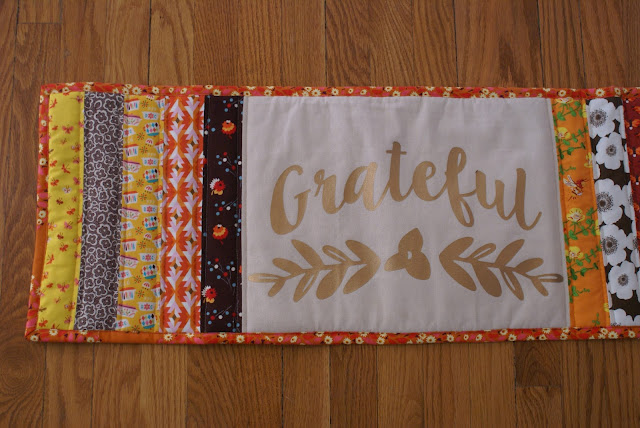 I raided my orange/yellow/brown scrap bins and bags to make a scrappy patchwork front.  I've heard a lot of people often say they "hate" the color brown for quilts but I think it's underrated.  Dark chocolate brown adds such a nice contrast, it truly helps other fabrics shine. 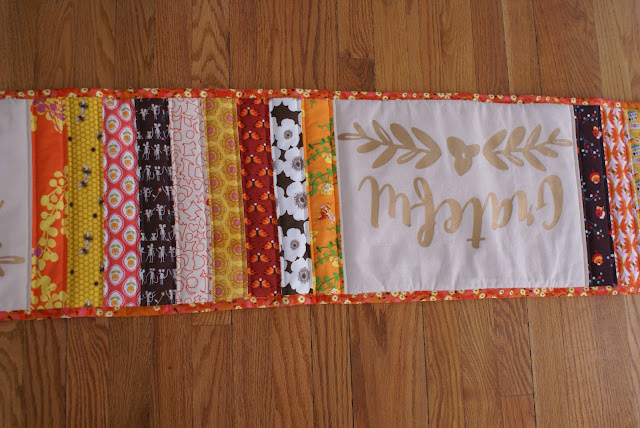 I'll admit that I didn't finish the runner in a super-timely manner, it was all done about twenty minutes after all of the food was ready.  I did take sewing breaks to help with the meal but seriously- you guys- my husband is just a great guy who is so supportive and really showed patience with my crazy idea to make a table runner none too soon before the big day.

Linking up to Scraptastic Tuesday.
Posted by Dresden Lane at 10:32 PM

Bravo you Laurie! it is good to remeber to be grateful for friends, a supportive partner and the time to do stitching! It is ready for next year too. Thanks for linking up to #scraptastictuesday!

Thanks for sharing your post-show experience! I would be tired too after all that production-line sewing. Give your body -- and brain! -- the downtime it needs. You deserve it.

Love this addition to your Thanksgiving meal and the story behind it!