I accomplished a lot sewing-wise this weekend. I don't know where I got all of the energy from considering how exhausted I feel today. Maybe I had the motivation because most of the projects I completed had fast approaching deadlines.

First, I made a peg bear for a 2 year old's birthday party. The birthday boy loves anything car oriented, so I used one of the few car fabrics I own. I have plenty of other transportation themed fabrics - but it was kind of strange that I didn't have a ton of car options. The little boy seemed to like it - so that made me happy. 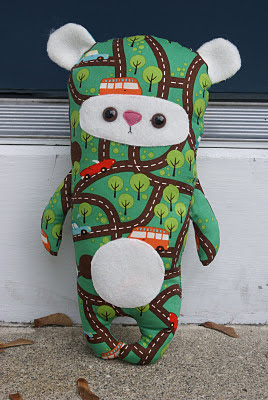 I don't know if I will ever get into making Halloween costumes, but I knew I could make a trick or treat bag. Halloween was postponed till this past Friday night due to the weekend's snow storm that brought down power lines, trees, and resulted in thousands losing their power for days. 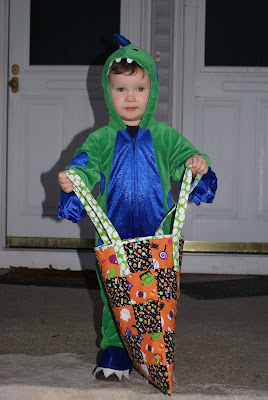 I had some Riley Blake Halloween fat quarters that did just the trick for this easy project. I used a pattern from The New Handmade: Simple Sewing for Contemporary Style by Cassie Barden. 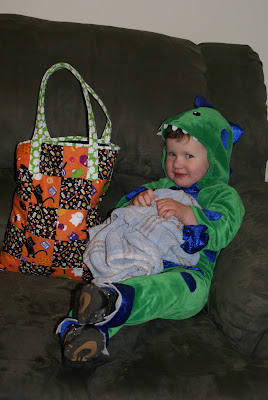 The only thing that about killed me was turning 1" tubes of fabric - with a layer of batting - right side out. I had to have Nick help me and it delayed me so significantly that the bag wasn't ready till about 10 minutes before we had to leave. 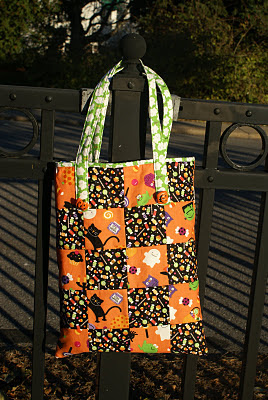 I finally made two blocks for the Hip to Bee Square bee. Both of these blocks were easy and I am embarrassed that I was given 2 months to complete them and I was still a week late. The Kona coal pieces I was given for the stacked books block (left) came from two different dye lots- I find it very annoying that Kona can't tweak it's process to make all of it's Kona consistently "colored." 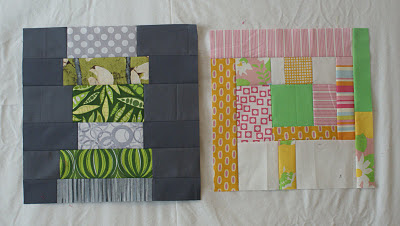 Finally, I made binding and attached it to my Dots and Ties Quilt - now I am doing my favorite part: hand-sewing the other side. Stay tuned for a big reveal of the completed project! 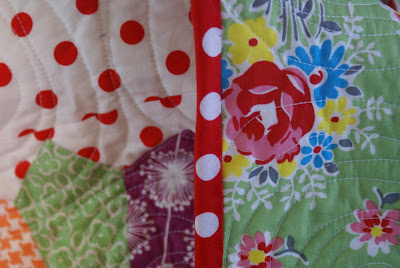 Gregory is ADORABLE!!! I love his costume.