About a year ago, I was looking at the "Legendary" quilt pattern online and my oldest son spied what I was looking at.  It piqued his interest, as he loves Bigfoot.  Keeping this quilt a surprise was futile.  I decided to involve him in the planning on the quilt, a decision that resulted in a quilt that was completely different than I would have made without his input.

This quilt (top) is made up of only 4 different fabrics, I definitely would have chosen to go super scrappy and make every tree out of a different green fabric for a super scrappy look.  I also wanted to use a print for the background: I had enough black fabric with white stars that would have been fun.  But Gregory was adamant that we go super simple and his favorite color is blue.....  The only thing I didn't back down on was having a light colored Bigfoot rather than a dark brown like he said he wanted.  I knew dark brown against dark blue would not stand out and I was not about to do all of that work for nothing! 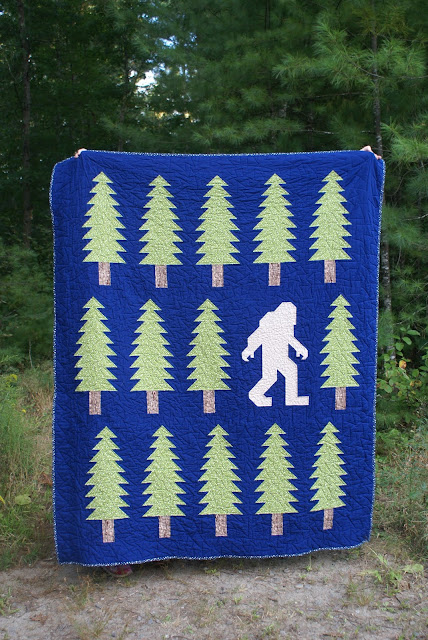 I decided to go the extra mile for him and use a super soft backing.  I bought a $20 Ralph Lauren throw at Marshall's.  This was a much cheaper option than $13 a yard cuddle fabric that would have had to be pieced for the backing.  I'll admit that my longarm didn't love how thick this project was!  We both survived but it's not something I'm eager to do again. 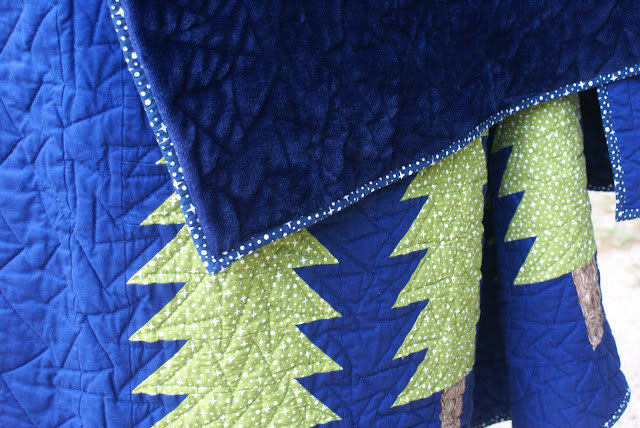 I finished the quilt about a month before Gregory's 10th birthday.  He loves it!  I am thinking I *might* be able to surprise him with a matching pillow this Christmas.... 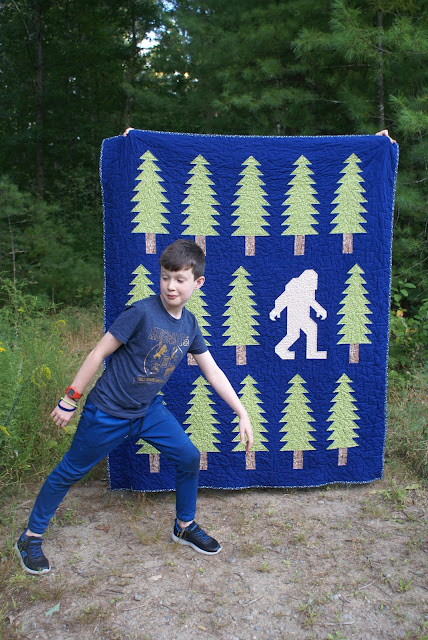 I had this whole quilt cut out in time for the April FRMQG retreat but only sewed a few leaf parts while I was there.  Basically, the whole top came together during my husband's paternity leave this past summer.  I couldn't believe that I sewed so much after giving birth to Isaac... but I got to the point of feeling better and was very tired of TV and scrolling on my phone.  I really charged through the (monotonous) sewing of the trees and Bigfoot came together on a Saturday.  I was almost embarrassed to have been so productive when I'd barely had a baby but it just illustrates how much I need sewing as an outlet/enjoyable pastime in my life.  It keeps me sane and happy- I enjoy it SO much!

And just for fun, here's a cute picture Gregory drew of his favorite mythical creature: 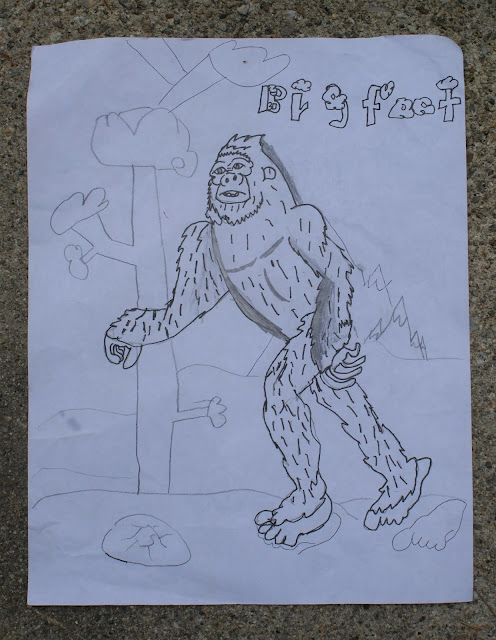