Another quilt finish I completed before we moved to NH was this rainbow scrappy quilt.  I completely followed what Rachel at Stitched in Color shared a while ago.  I did a photo shoot at Garden of the Gods with my family: 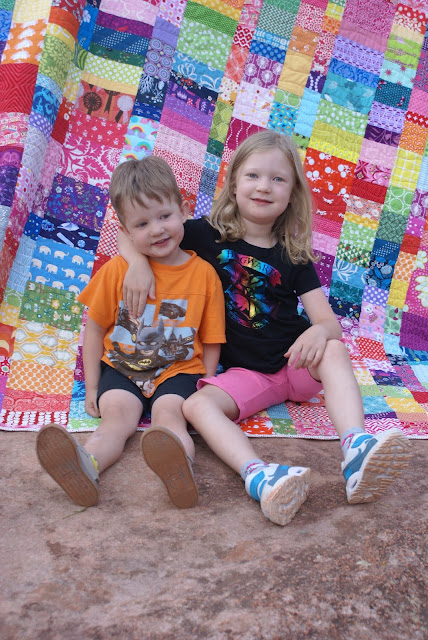 I used this project as a "leaders/enders" project but sometimes I just worked on it, just sewing, sewing, sewing (lots of time consuming cutting from the scrap bins too!).  I knew I didn't want it to be a WIP I moved with, the long columns would be tricky to store neatly and I would've worried about the seams coming apart.  The columns are uniform widths: 6.5", 4.5", 3.5", and 2.5" but I cut them in lengths with however long the scrap was- I hope that makes sense. 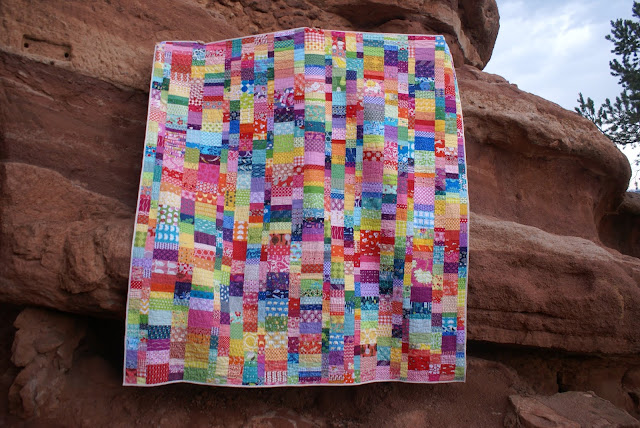 Did I make a dent in my scraps?  The definitive answer is no.  But I did use up all my obnoxious rainbow fabrics I bought in the early part of my sewing obsession that I no longer care for, they're all on the back- I'll post a picture sometime. 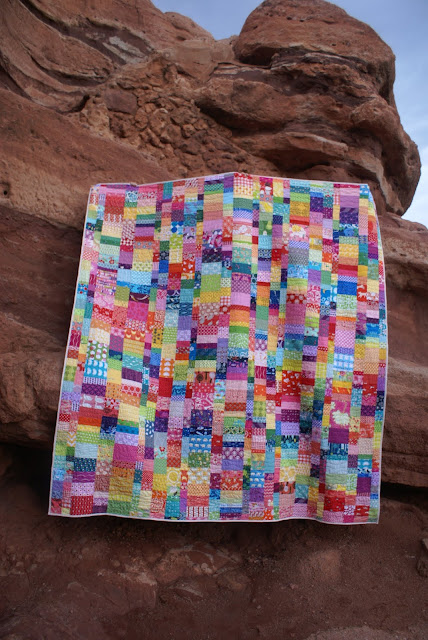 Sometime I would like to make this quilt again in a totally different, maybe more "grown up" color scheme.  Wouldn't it be fun to make something like this in a pretty combination of navy, gray, and chartreuse?  Or what about black, light pink, and gray?  I don't know- the possibilities are endless. 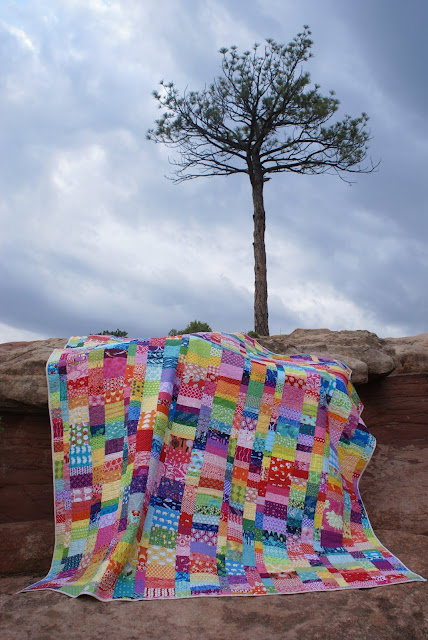 Since moving, I haven't done very much sewing at all.  It took forever to be able to set up my sewing room- we ended up buying some cabinets from Home Depot to hold all of my supplies and I love them but they took forever to arrive.  The last "unpacking" task was to assemble the longarm and pretty quickly, we learned that seven parts of the table had been lost.  We searched everywhere and found EVERYTHING else we thought we were missing (except for two handmade items I am confident the packers stole!) but we did not find the parts.  The longarm table is exactly 10 years old, I worried that the parts would not be able to be replaced.  I had reason to worry- the whole process was a nightmare and honestly made me feel pretty depressed.  I couldn't bare to sew during this stressful time.  I barely hit owning the longarm for one year and it  was looking like the entire system could be rendered obsolete.  But finally, a week ago- the right parts arrived and we just need to set it all up.

Amidst the longarm drama, over three weeks ago, I was hit with a nasty cold that I am still dealing with.  I haven't worn real pants for longer than my outings to Urgent Care and I've missed every Christmas party I had planned to attend (four so far.... we'll see what happens this weekend).  I am aching to get back to my favorite "coping skill" but I need to get better first.  I am so sick of Netflix, I've lost 15 lbs, and I can't sleep in my own bed (a reclining couch offers some relief to my incessant coughing).  Two of my three kids have caught the bug as well as one just recovered from pink eye, so yeah, it's been a rough month!  I can't wait to get back to creating and really hope to be better for Christmas.

All this is shared not only to vent but to explain why it's been so quiet around here.  I hope to get back to creating really soon!
Posted by Dresden Lane at 4:01 PM