I honestly don't love that my children's school has uniforms.  Well, I actually love it for my oldest son.  He's been picky about what he wears starting at a very early age, making us believe it was something he was born with rather than learned.  So we don't have to fight with him about what he wears to school and that's lovely.  But I would love to dress Charlotte in an entirely handmade wardrobe!  The polo shirts and khakis are so glum when I think about the dresses and outfits I could be sending her off in everyday!  But we like the school and one big draw has been that it offers half day morning and afternoon kindergarten- which means I get more time with her at home- and that's one of the many "positives" of the school.

Recently, I got an itch to start sewing more knit patterns.  I often hear other sewists talk about how easy they are to work with.  I've done some knit sewing with Oliver and S and Patterns for Pirates patterns.  I decided to turn to another popular children's pattern company: Violette Field Threads.  I had this one yard cut of plum floral in my stash and decided to make the Amelia top.  I cut everything out except the ruffle trim: I didn't have enough.  I went to Hobby Lobby (where I had originally purchased the fabric) and couldn't believe my luck: they had a full bolt of the exact same fabric and knits were even on sale.  I had bought this print at least 6 months ago and was merely hoping to find a coordinating fabric to use for the ruffle.  I was very lucky! 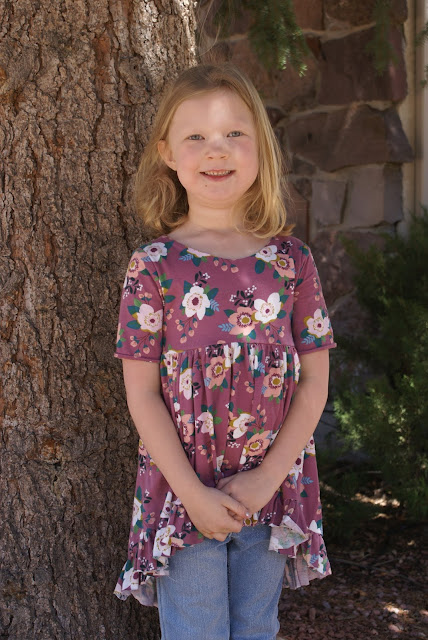 I made this top mainly because I was interested in altering the pattern to be dress length and I didn't have a lot of confidence in altering a pattern because I have never done that before (for clothing).  I figured I would start by following the directions exactly and hopefully acquire the confidence to make some changes on the next try. 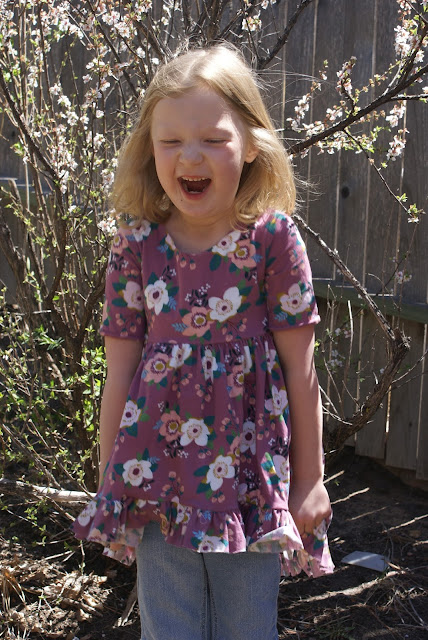 At said Hobby Lobby knit sale, I bought two yards of this silky knit floral.  It proved to be a challenging sew simply because of the stretchy-ness and thinness of the material.  But I persevered!  Shortly after finishing the dress, Charlotte wore it to lunch with me at a restaurant and a woman approached me and asked where I bought her dress.  That's the first time that has happened to me!  What a compliment! 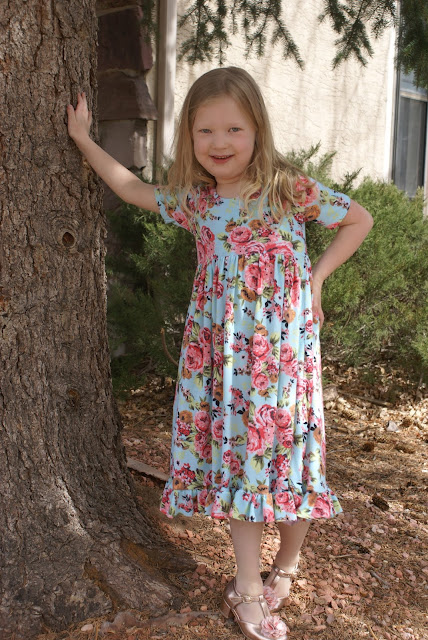 Finally, after making the Amelia top/dress twice, I decided to cut into the more pricey Art Gallery fabric I had grabbed during a Black Friday sale from ilovefabric.com  This knit fabric was so nice to work with and I was much more confident making this dress after having had so much practice. 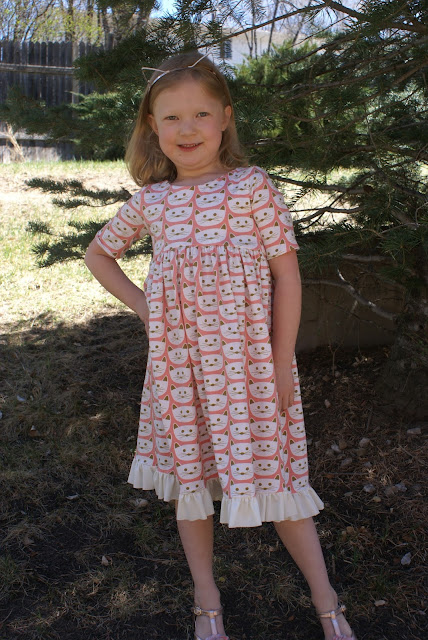 About two weeks ago, Charlotte had an event coming: the Daddy/Daughter Princess ball hosted by her school.  This was such a great event, completely put on by school parents and volunteers.  She nearly insisted on wearing a store bought dress but found her choice to be too big (it was a really nice yard sale find that I bought and stowed in her closet).  When I showed her the many stash fabrics she could choose from, for me to make a dress for her, I was quite surprised when she chose this understated cat face silhouette dot fabric from the Meow collection by Riley Blake.  She had so many wild and bold choices with large cats, unicorns, and even squirrels- but this was great!  I already had a plan and the coordinating fabric on hand.

I made the Dainty Darling dress from the book Sew Classic Clothes for Girls.  This pattern is not as well written as I am used to but my experience in sewing Charlotte clothes has helped build skills that help me in such situations. 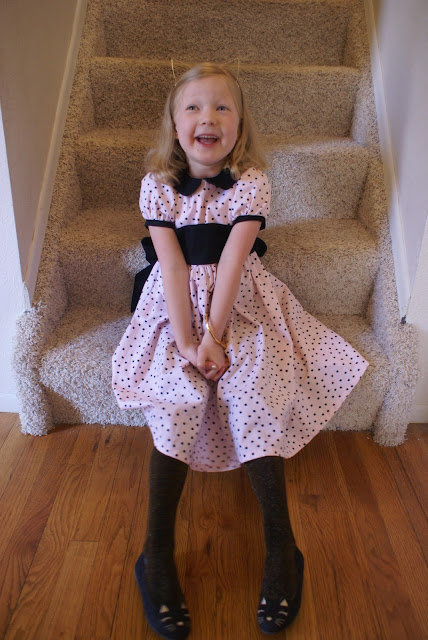 I bought Nick a $8 tie from TJ Maxx and they looked like the purrfect pair! 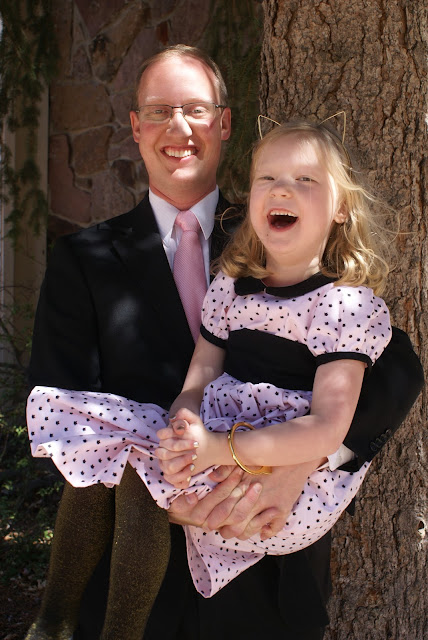 Even though Charlotte has to wear uniforms to school, she is able to wear all of these dresses to church every Sunday.  Occasionally, there are other times when she needs to be dressed up too.  I honestly would love to have another daughter to pass these clothes on to.  I still have every handmade garment I've ever made her, there's no way I would donate them or get rid of them.

Posted by Dresden Lane at 4:12 PM No comments: