I participated in  three craft fairs this year, two on November 11 and one on December 2.  Signing up for two on one day was probably not the smartest thing I've ever done- but I did manage to pull off making enough inventory for two booths.  I sewed like a maniac.  Here's how I did it:

Here are some of the fruits of my labors:

Tons of gift/business/store loyalty card wallets.  I don't have pictures of all that I made.  This picture happens to represent the ones I made from just scraps.  Very satisfying to use up so many scraps but it was often time consuming to dig out the correct sizes of scraps that would coordinate together.  Eventually, I just started pulling coordinating fat quarters and made several identical ones.  These sold very well. 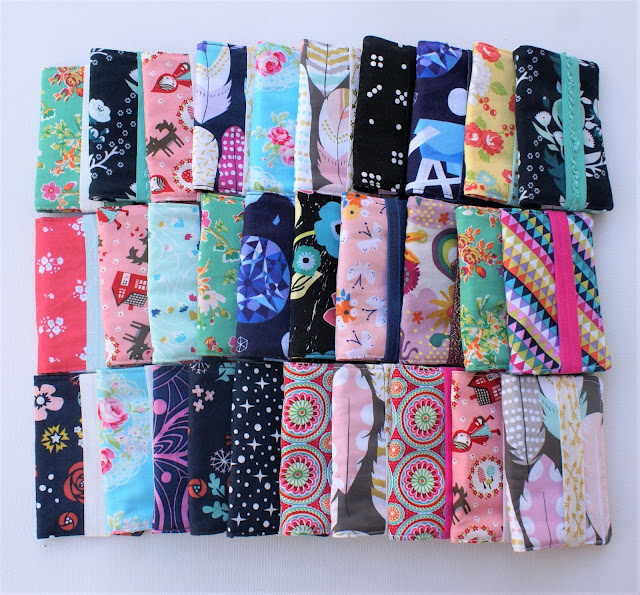 Key Fobs: These were also made from scraps.  They did not sell well at all, I sold one and gave away one. Colored Pencil Rolls: These were very time consuming to make.  I actually made twenty-four!  It forced me to buy and learn how to use invisible thread.  They were one of my higher priced items: $22.  I sold a dozen and was happy with that. 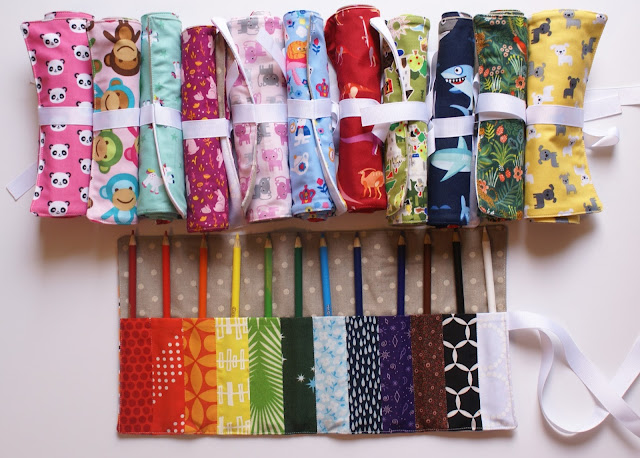 Chalkboard Rolls: This is another project that I "over cut" exterior fabrics for.  I just got into a "zone" and cut maybe 33 outer squares when I had meant to only cut 20.  After realizing my mistake, I just went with it and made tons of these.  They sold quite well at my November sales but I only sold two at my December fair. 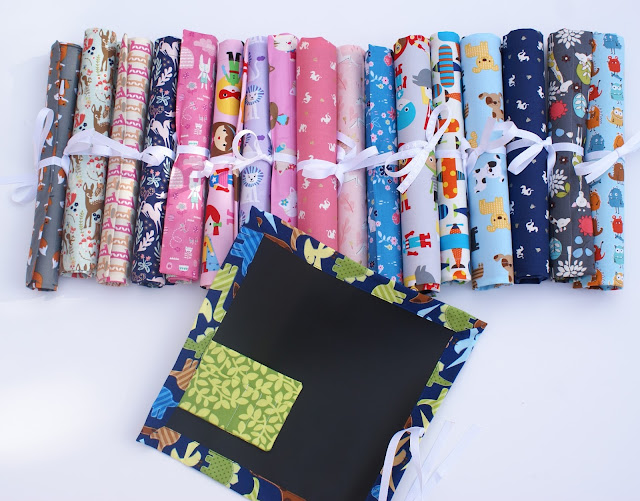 I really tried to go heavy on the girl designs for bibs because that was what was most popular last year.  When I was setting up my booth at the Liberty HS fair, a friend of a vendor came over and talked to me about my bibs and my taste in fabric- she was really smitten with the designs and bright colors.  Before I knew it, I had agreed to complete a custom order for her that evening!  It was a big boost of confidence for me to have basically made a sale the night before the big show.  I whipped out three bibs for her that evening and she bought them early the next morning.  She was a sweetheart, expecting a grandson soon and was excited to have a unique gift.  Overall, the bibs weren't a hug seller for me but they definitely caught a lot of people's attention. 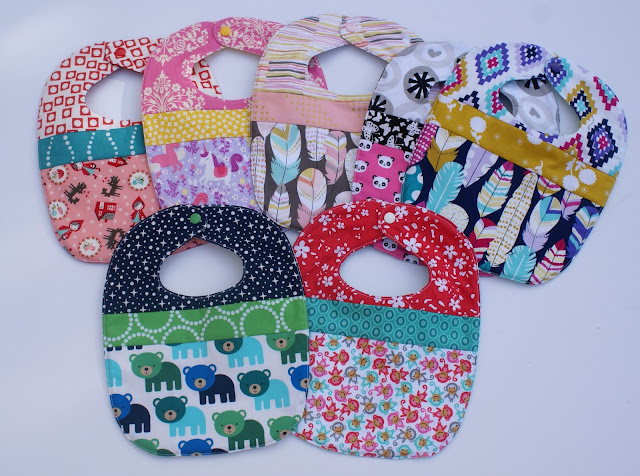 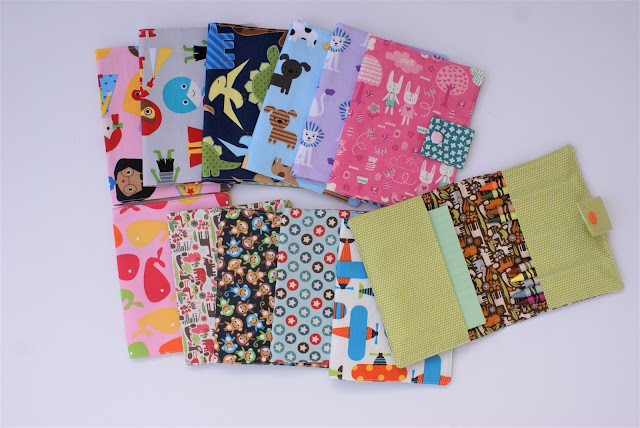 While sewing for the fairs, I used mostly stash fabrics but I did order a few "trendy" fabrics, like donuts, feathers, and unicorns.  Surprisingly, these weren't a big draw to people.  I sold one donut pouch and several of the gift card wallets in the feather fabrics, but I have most of that inventory left over.  I did use some of my favorite Japanese import fabrics with cat illustrations on them and had a mother daughter pair visit my booth four times, spending a total of $51 on kitty themed pouches. 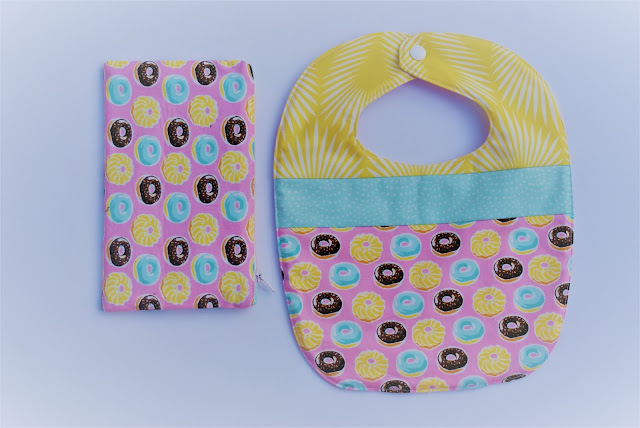 Well, this post is pretty lengthy, so I think I'll continue my craft fair thoughts and pictures in another post.  I'll share more soon!
Posted by Dresden Lane at 1:20 AM

I have never done a craft fair, but this is a really interesting read and the information is squirrelled away in my brain for future use. x

I've done craft fairs and this info is so useful. Interesting as to what sells this year and not the following. How scrap/stash fabrics sell. How production sewing helps or makes you crazy. I sell on etsy because of my day job but I will be doing fairs/bazaars again in a few years.
Thanks for thinking out loud.

Great read! I only helped at a friend's craft table years ago, and felt really bad for her that she only sold one ring and didn't cover the cost of her table. It's hard to anticipate what will attract people's attention. Thanks for sharing such great information. Found your blog on Crazy Mom Quilts Finish it Up Friday! Happy quilting!

Thank you for sharing this. Such an honest recap - it is appreciated!!