Well, I have had some rough spots over this weekend and insomnia is the result: I am pretty sure I left my handmade Aragon Echino diaper bag in a parking lot on Friday and tonight I sliced my thumb bad enough to necessitate five stitches.  I can't sleep and need to distract myself from online Black Friday fabric shopping, so it's time to talk more about my recent experiences selling at craft fairs.

Originally, I just signed up to participate in a craft fair at my son's school, but I soon became unsure of putting so much effort into making for just one craft fair.  It was very late in the season to start applying to lots of craft fairs, all of the ones I researched were no longer accepting applications.  I saw a flyer at Joann's for Sunnyside Christian Church and was able to get on the waitlist.  Two weeks before the Sunnyside craft fair, I was informed that I was off of the waitlist and had a spot.  I have since learned that being accepted to shows very late into the season is a big red flag, it probably means that there is not a big demand to vend within them and there is desperation to fill all of the spots.  Luckily for me, I was very satisfied with my experience there, so I guess I really lucked out.

On that note and somewhat curiously, the folks at Sunnyside gave me a really nice spot to vend- right by the main entrance where everyone entering the fair came in.  The stream of customers was quite steady and I made my first sales within a few minutes of the craft fair starting.

Here's my setup.  Since this church is only about a mile from where we live, it was easy for me to have Nick bring all of my stuff in and I came later to arrange it all the day before the show. 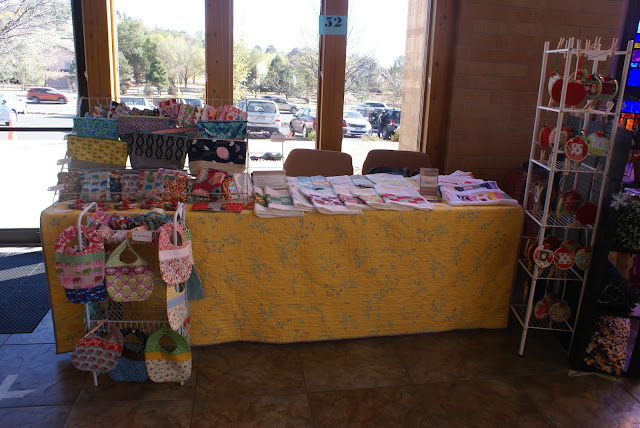 These next few pictures were taken at the end of the day and show how everything became a bit disheveled.  This rack was an awesome yard sale find from the summer, just $3.  On the 8" long table, it didn't take over like it might have on a shorter table. 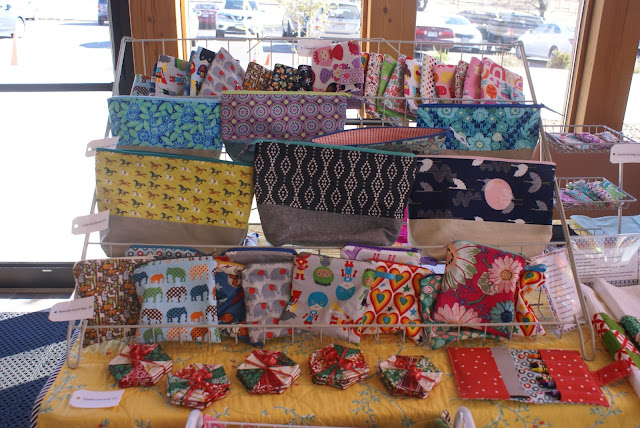 The patchwork dish towels were some of my best sellers, I sold nearly one dozen and this is what I had leftover: 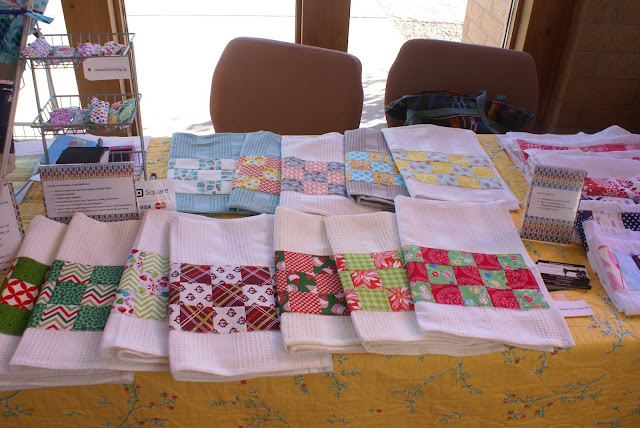 I used clothespins to hang the many hoop Christmas ornaments for display on a bathroom shelving unit.  Most customers didn't seem to pay much attention to them and I sold none. 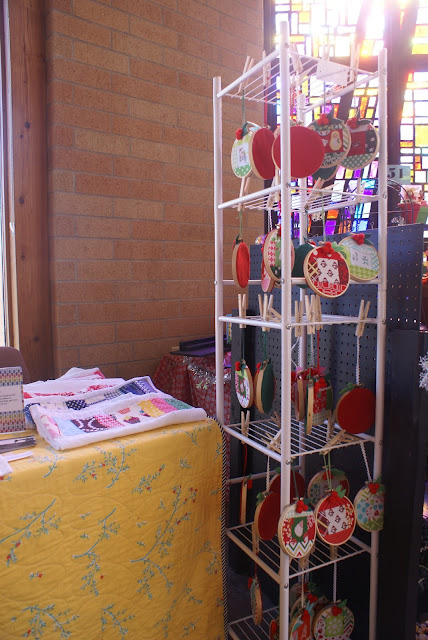 The policy of this craft fair was that vendors must set up the day before.  I brought Charlotte with me to do the setup and she had the great idea of hooking the bibs to the poles of this stand instead of setting them inside the shelves like I had planned.  Genius! 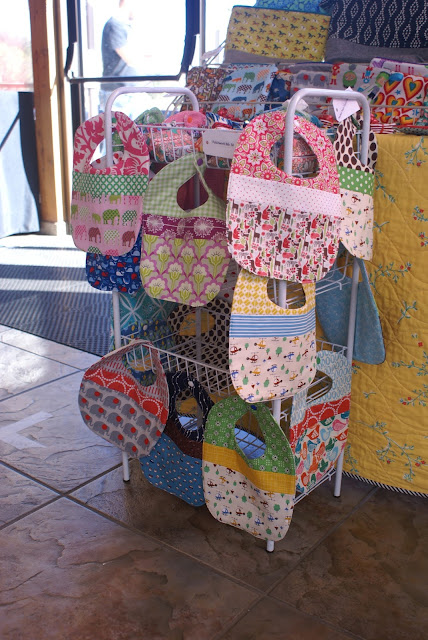 The whole day of vending at Sunnyside was fun, exhilarating, and exhausting.  I was very stressed with the poor wifi signal that made accepting credit cards on my Square reader very slow and frustrating.  I am definitely more of an introvert personality and found the task of interacting with so many people to be very tiring- I mean, there's a reason why some of my greatest happiness is being in my sewing room, sewing away in solitude!  I also had fun because the sales were very steady and it was so validating.  I was so tired from so many late nights of sewing but to see people appreciating and purchasing my work was simply awesome.

So I should explain that one reason why the Sunnyside fair went so well is because I many friends personally came by to the fair to purchase from me.  They knew I was going to be there because I posted about it, with pictures of my items, on Facebook.  I'd say about one third of my sales were to friends.  I honestly have to admit that I did not expect this.  My main motivation for posting on FB about the fair was to get feedback about what people like to buy and get advice about selling; I received a lot of helpful feedback from friends who have had experience with vending at shows.  I also have to admit, on a personal note, that it was a big confidence boost to have friends make the point to come by and say hi- several didn't purchase from me and that was absolutely fine- it really meant a lot to receive that kind of support and really made me feel loved.  I've written on here before about how lonely and rejected I've often felt here in Colorado but having so many be so kind was a big boost.

The RMCA (Rocky Mountain Classical Academy) Market Day was the following weekend after Sunnyside.  I spent that week making more items of my bestsellers from the previous show: reusable snack bags, dish towels, and bibs.  I also added a new item: the chalkboard travel rolls (which didn't sell at all).

I setup my booth the day of the fair, arriving there around 7 in the morning.  It took quite a while to carry it all in and set it up by myself, but I was ready by the time it started at 9.  I had a little more room to setup than I had at Sunnyside, so I brought along a borrowed clothes drying rack (shown right) to display lots of bibs. 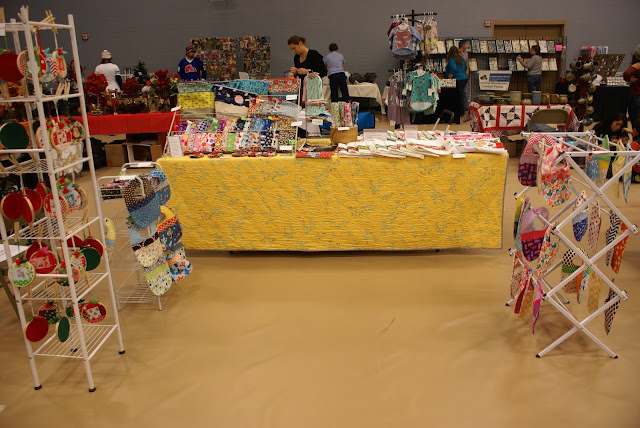 So this fair was a big disappointment compared to my experience at Sunnyside.  I already had confidence in my items and prices since I had done so well previously.  I knew what the big problem was: there were so few customers.  It was not a popular fair to attend.  Apparently it was the sixth year they've hosted one, but I swear, the show felt like a ghost town!  At Sunnyside, I didn't dare leave to go to the bathroom- it was so busy!  (Well, I did once, of course).  But at RMCA, I was bored and there wasn't much of a need to be strictly at my booth the entire time.  I saw some people come into the vendor area who didn't bother to walk around and check out all of the booths; there simply weren't many "serious shoppers." 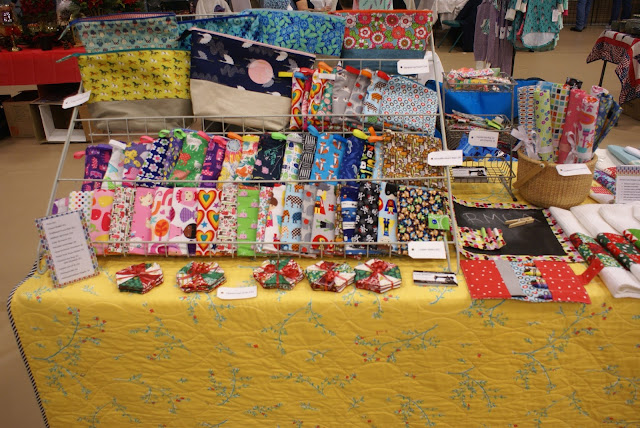 My biggest customers at RMCA were other vendors: two women nearby came by and bought bibs.  It's kind of sad if nearly half your sales are from other vendors- sales like that should be a "bonus," not the majority of one's profits.  The day was depressing and boring.  I brought cross-stitch to work on and chatted a lot with the girl seated behind me (this was her first fair ever and her items were adorable and impeccable! I tried to assure her that the slow day was not due to her awesome and gorgeous stuff). 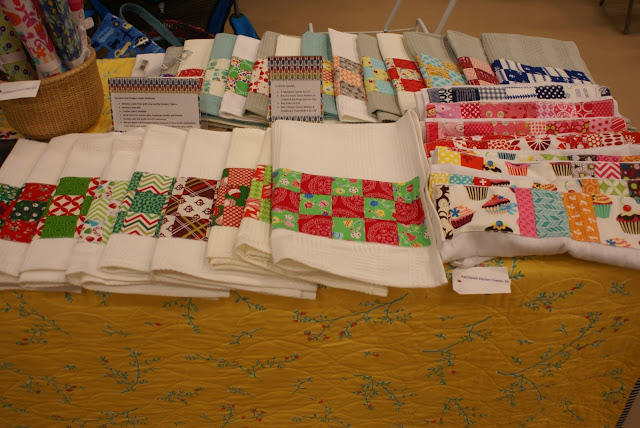 The fair organizer checked in with me at the end of the day and asked me how it went, when I told her my sales were nearly quadruple more the previous week, she was a little defensive.  It was awkward for me because I didn't want to be rude or ungrateful; but I really think anyone would've noticed how empty the whole day was, it was SO slow. 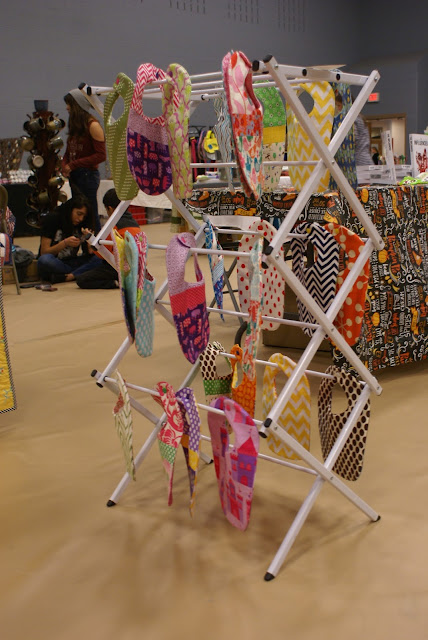 At Sunnyside, the fair organizers asked all vendors to donate 10% of their proceeds to the church.  I made $369 there and donated $37 as requested. The RMCA was a $40 flat fee, I made $101.  Most of the money went back into the family bank account to cover the many costs I had accrued.  I do plan to use some of the money to clean and service my machine, which has seen so much use that it is once again sewing on it's own and acting a little crazy.  I have also used some of the money to indulge in some fabric shopping; shocking, I know.

In my next post about the craft fairs, now that I've covered a lot of the logistics, I will try to go more into my thoughts and feelings about the whole experience as well as future plans for selling handmade items.
Posted by Dresden Lane at 3:52 AM