A Finish and a Start

I've been having the hardest time being creative lately.  I recently told a friend that my brain can only handle something like a "quilt kit" lately.  That was hard to admit to, because I really dislike the idea of putting together something that someone else has designed and not even having the freedom of doing my own fabric selection.  But the thing is, my brain is at the point of not being able to handle anything more challenging.

I will admit to dealing with some serious anxiety in my life right now: we've just hit the two year mark of moving to Colorado and I still don't feel "at home."  Colorado Springs is a big city that feels very impersonal.  I rarely see the same person twice when I go to the public library or a store.  I've been experiencing that disconnected feeling at church too, which has been the most painful.  I've found meaning and community among quilt guild friends and a MOPS group, but it feels like a difficult trade when I consider the meaning and connection I had with my mother.  She visits often and we talk frequently, but it's not the same as living close by.

It's not just living in CO- I am sure a little post-partum, sleep deprivation, and winter blues are effecting me too.

I explain all of this as an effort to be more personal here and less, "look at what I made."  It's interesting to know what goes on behind the scenes.  Although I enjoy sewing and quilting  immensely, it should never become a point of stress and major frustration for me.  So I am just trying to make what I feel like making and give myself permission to follow patterns and not try to create original masterpieces every time (as if that's what I used to always do.... ha!).

This bag fits the bill for this new outlook I am trying to take when it comes to my sparse creative time.  I've made this "Make it and Take it" pattern a few times previously and I just felt like making one for myself.  I am ridiculously proud of my fabric combination here- lots of fun favorites with a shirting interior (something simple for the lining, since the exterior is so busy). 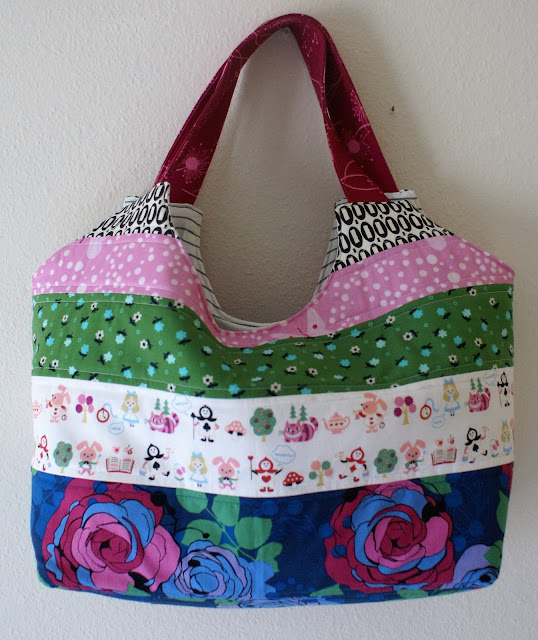 So a big thing that has recently lifted my spirits is the upcoming guild retreat.  I signed up a few months ago with some trepidation.  My big question was, "Will my baby still be breastfeeding then?"  To his credit, my husband was supportive of the idea and I felt determined that I would pump if I had to.  A few weeks ago, I ended up weaning Owen.  I'll spare you the details but it was the right decision for both of us.  I am glad I didn't let nursing the baby stop me from signing up for the retreat!

One project I will work on is a Hello Kitty quilt, QAL hosted here.  My daughter is a die-hard HK fan and this QAL was just too cute to resist.  My only concern is that the hostess hasn't posted block instructions since Feb 2 and all of the blocks were supposed to have been posted by now (per her own schedule).  I am not one to get impatient or frustrated with the amazing people who take on such big projects for the benefit of others, but I am going to work to prepare another project for the retreat as well.

I've spent the last week cutting up all of the squares for this pixelated quilt.  I was so proud to finally start a "scrap quilt"- as all of these squares are from scraps with a little stash addition of dark and medium gray: 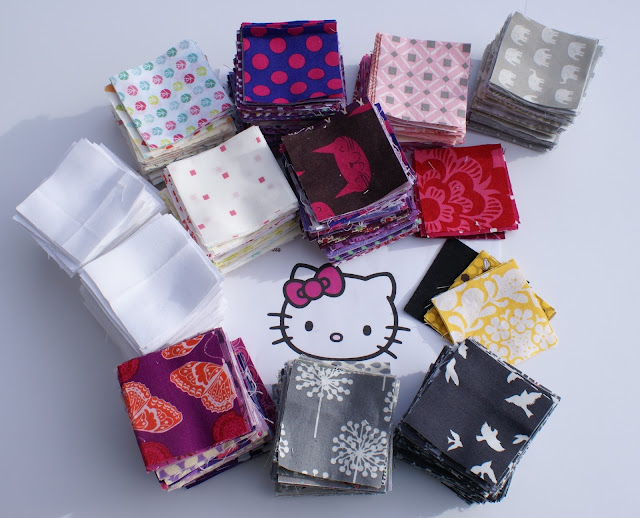 Another fun thing to share: this past Saturday was the FRMQG anniversary party.  The guild leaders contacted sponsors and had generous presents for every member in attendance.  We had a little game of passing around the wrapped gifts, and I ended up with a very heavy Lord & Taylor box, filled with fabric!  I was so overwhelmed to receive all of this- apparently one of my friends was worried I was disappointed- but I was truly shocked that I would receive something so great. 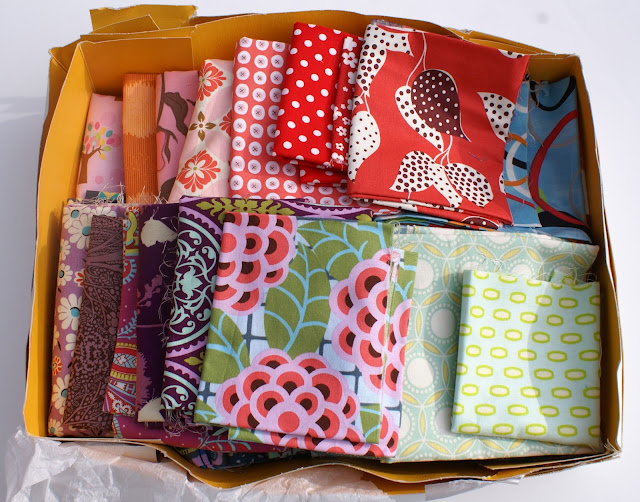 These are some of my favorites from the box: 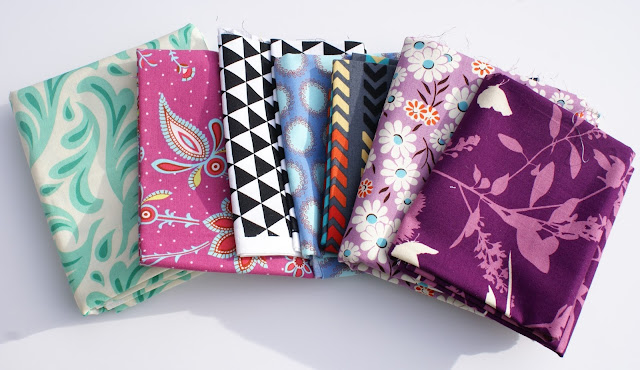 Soon I will have lots more to share from the retreat, the secret sister gifts I've been working on (also for the retreat), and I have nearly finished the quilt I have made for my daughter- who turns four next Monday (on Leap Day!).  Thanks for reading.
Posted by Dresden Lane at 2:53 PM 1 comment:

The most recent theme for Le-Challenge is the word "round."  It was an easy decision to make myself a 241 tote after having had so much fun making a few for gifts at Christmas. 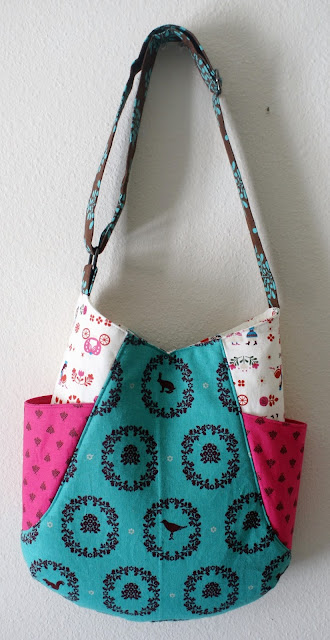 For this bag, I used a rectangle ring on just one side of the bag and I like the look much better than having a ring on both sides. 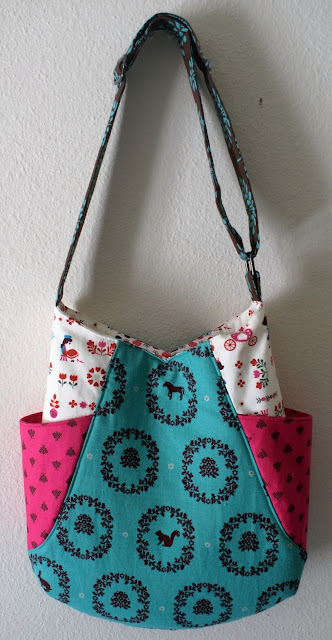 Here's a better picture of that adorable Cinderella fabric. My three year old daughter LOVES the character and it was fun to use this fabric. 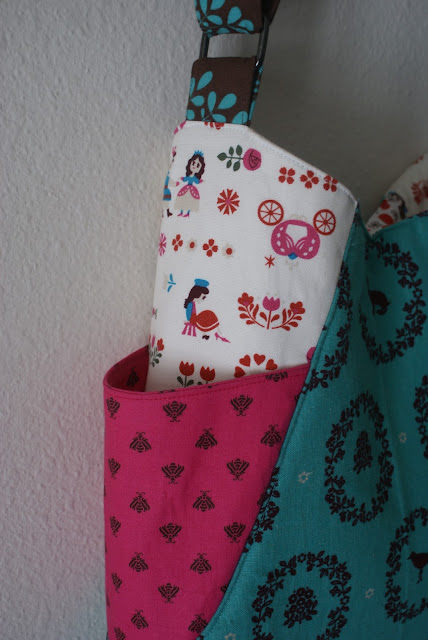 Sewing the curved seams of this bag is not difficult at all.  You've just got to take it slowly and remember to clip the seam after you've sewn it.  I have been sewing curves in bags for several years now and I have found that doing so has prepared me for sewing curves in garments.  It's great when skills learned become part of one's "toolbox."

Linking up to Le Challenge, Finish it up Friday, and Scraptastic Tuesday.
Posted by Dresden Lane at 9:50 AM 8 comments:

This top came together fast!  I've had these Ann Kelle princess fabrics for a while and I wasn't sure how to showcase them.  I was very close to making a "giant star" quilt but grabbed some of my quilting books to look for other ideas before I started to cut.  I soon came upon the "Kitchen Window" pattern from Elizabeth Hartman's The Practical Guide to Patchwork: New Basics for the Modern Quilt Maker. 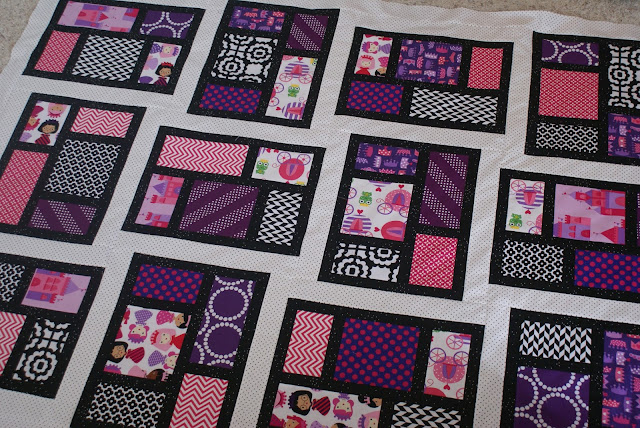 This pattern was so easy and so effectively showcases large scale prints without having to resort to simple (boring) patchwork.

All of these fabrics came from my stash except for the black sprinkle print from Cotton and Steel.  I bought that at a LQS and it goes great with the black on white pin-dot I used for sashing. 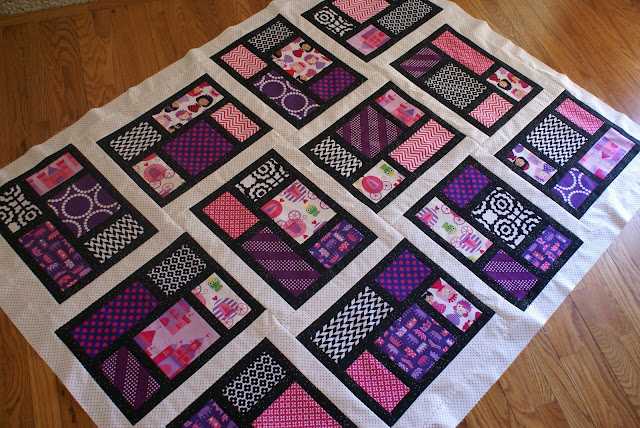 I definitely feel comfortable quilting this on my domestic machine but I hope I can have the energy to tackle it at night, after my daughter is in bed.  I've managed to keep this project a secret from her so far..... 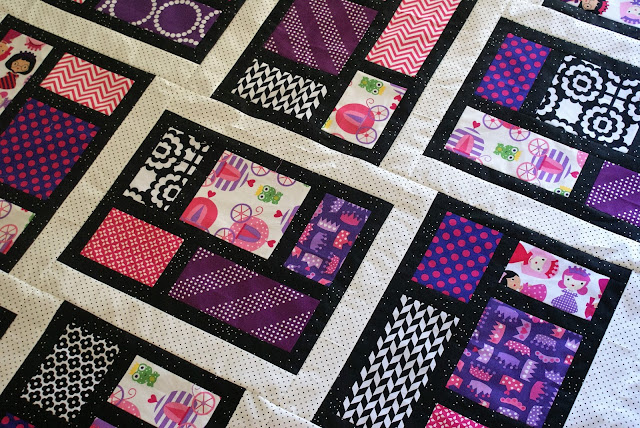 Linking up to WIP Wednesday at Freshly Pieced.
Posted by Dresden Lane at 1:39 PM 12 comments: