I have been waiting for two slow online orders to arrive in order to continue my work on some recent wips.  In the meantime, I did something that I don't usually do: tackle a project way before the deadline.
I made my project for the BMQG Madrona Road challenge.  Michael Miller fabrics generously sent our guild two yards of 7 different Madrona Road prints - they were divided among 14 guild members who signed up.  We were allowed to make anything we wanted so long as we didn't add any other prints.  I love the "Manhattan Purse" pattern - I think I have used it at least 7 times now - examples are here, here, and here. 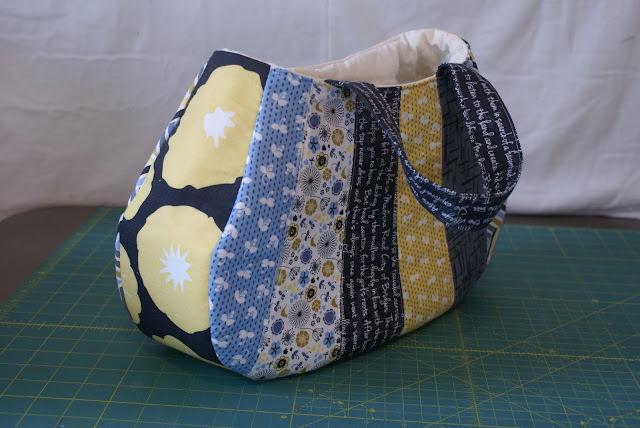 A good friend had asked me to make her the same purse with the fabrics she had purchased.  I don't often agree to sew other's peoples projects for them - but she is such a sweetheart and I knew it wouldn't take me too long to do - so I agreed: 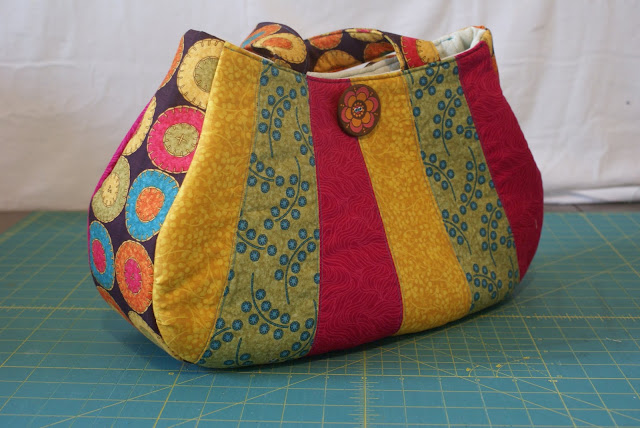 Here they are together, with their matching "pocket clutches" that I couldn't resist making: 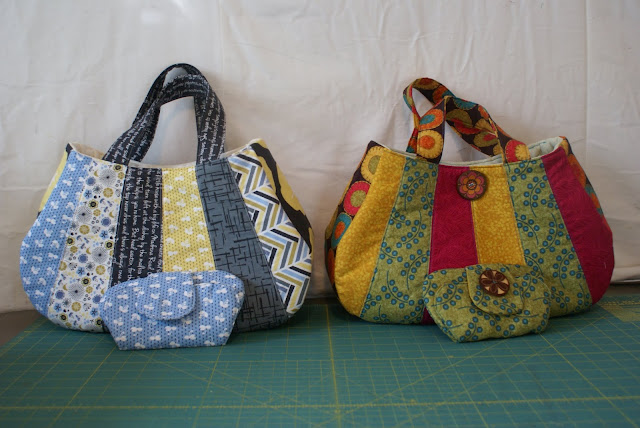 I also went ahead and finally organized my scraps.  Previously, I had stored them at my parent's house (long story short: we are quickly growing out of our apartment with the addition of the baby - an issue we hope to remedy soon!) but found that I always needed them for something.  It's such a pain to cut a chunk out of yardage when you only need a little piece for a project....  now they are sorted by color in tupperware-like containers arranged in the changing table (you've got to be creative when space is limited - beforehand, those shelves were mostly empty with a outgrown outfits lying on them.) 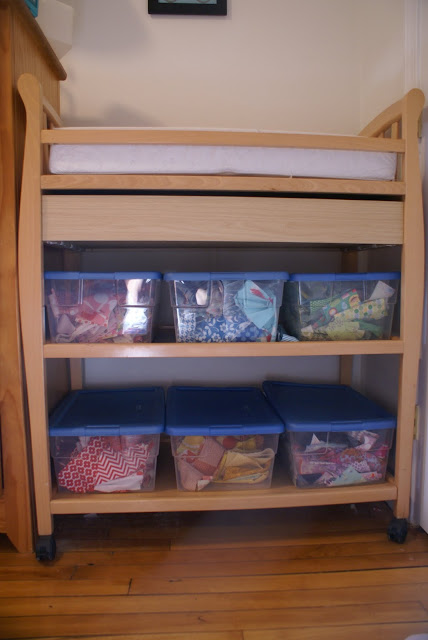 p.s. I know you were all planning to rush to the newsstands to get the newest issue of Quilty to see my project therein - well, I only recently learned my first project that was supposed to be in the January is slated for a later issue.  I will keep you posted!
Posted by Dresden Lane at 10:14 AM

Love the bag! It looks great!!!! Great idea with the changing table. I think we have that same table, and the shelves were useless. We removed them so we could put the hamper and diaper pail under there.

Love the bag - a great way of using some of those prints!

I love those bags and the little purse to go with it is icing on the cake!

Those bags are so cute!!! Now I know where to find your scraps when I'm running low... Can you come organize me too?

I love that purse! Great job for the challenge. And what a great use for the changing table! I have one upstairs that is not being used anymore. :)