The curse of pebble quilting

I've always liked the look of "pebble quilting" but have never wanted to utilize the technique on a large quilt simply because of the significant time commitment. But I figured I could handle doing it on a small quilt: 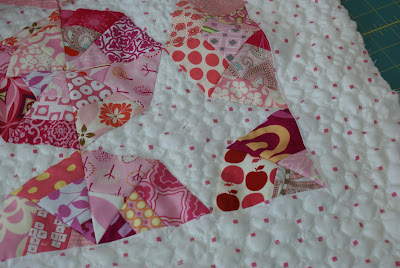 Well, the stupid technique ended up breaking my free motion foot. I was humming along - doing the pebbles on the border when the quilt suddenly would not move under the foot - it was horrible. It took nearly a week to figure what had went wrong (and I tried all sorts of "fixes" to see what had gone wrong - a new needle, re-threading the machine, using the foot on a different fabric/batting combo, etc.). When my mom came over on Wednesday, I had her bring over her free motion foot and I compared hers with mine. Turns out that I have used the foot so much that it simply wore out and the pebble quilting was the last nail in the coffin. 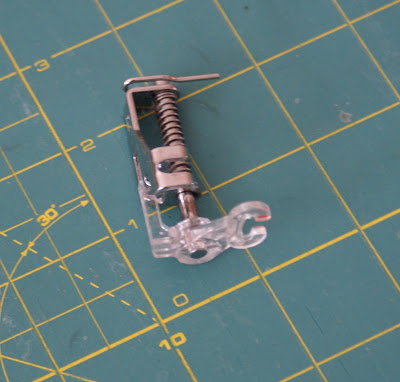 There are two large spots where the chrome is worn off and it is obvious that the spring has lost its ability to "bounce" very fast at all. I am glad that it only costs about $14 to buy a new foot and very relieved that I wasn't facing an expensive and inconvenient mahcine repair!

This experience made me think of my dear friend, Monet, who literally broke her machine beyond repair when she did pebble quilting on a baby quilt. She really had to argue with the store she'd purchased the machine from - insisting they honor the warranty she had had. They tried to give her back the machine when it still wouldn't do any free motion quilting - but she fought back and won - and they ended up replacing her machine!
Posted by Dresden Lane at 12:57 PM

I'm so sorry you two have had such bad experiences with pebble quilting! It looks so good in the end though!

Ah pebble quilting. I have a love hate relationship with it. I haven't touched it since I pebble quilted my Figgy Pudding Quilt. Maybe someday I'll give it another go. The quilt looks awesome though.