The night before I left for Louisville, I decided to make some airplane pants for Gregory. I used the Bedtime Story Pajama pattern (Oliver and S) and Anne Kelle's airplane print from "Ready, Set, Go!" 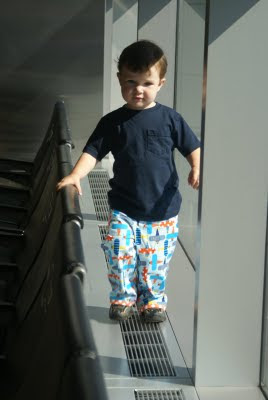 Traveling alone with a 23 month lap baby was daunting - but the flights couldn't have gone smoother. I was so happy to reunite with my husband (after a month long absence!) and have a visit with his parents in Louisville, KT. I had hoped to squeeze in a trip to Paducah while we were there - but it is a good 4 hour drive from Louisville and there definitely wasn't enough time! We had a nice time visiting with each other - we went to the downtown Science Center, Nick and I caught a movie (thanks for watching Gregory, Bob and Julie!), and simply had a nice time allowing grandson and grandparents to have fun together.

While I was there, a little bit of quilting was squeezed in: Julie showed me this gorgeous fan/dresden plate quilt that has seen lots of use within the family. I love the design and colors! 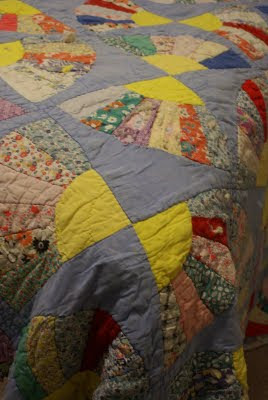 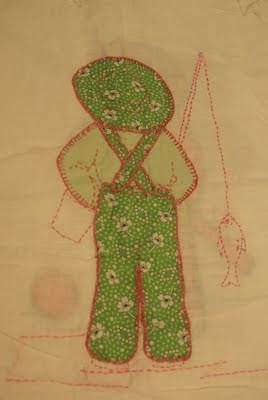 In the Louisville airport, on our way out, we had some time to kill and were able to admire this crazy quilt from 1875. The strawberries that Gregory is pointing to are three-dimensional. 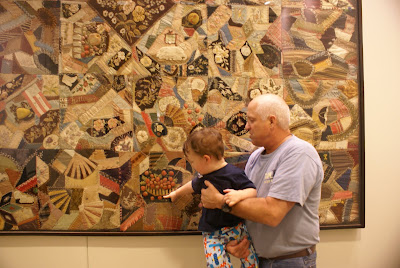 Since we returned on Labor Day, I have been wiped. It's also been raining non-stop and I haven't had a lot of motivation to do much of anything. But yesterday I finally got my act together and started putting the red centers onto the dresden plates - I am over halfway done. 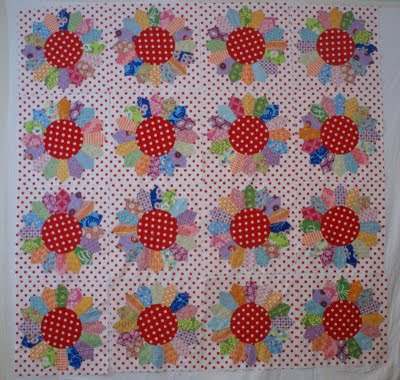 I should've inserted this picture earlier, but here is a picture of the fabrics I bought at a Louisville shop. They had a quite the variety of modern and traditional fabrics. I was also shocked by the lack of markup on fabrics - flannel was $10-11 per yard and home dec was about $14. Local quilt shops around Boston sell those types of fabrics for as much as $20 per yard! 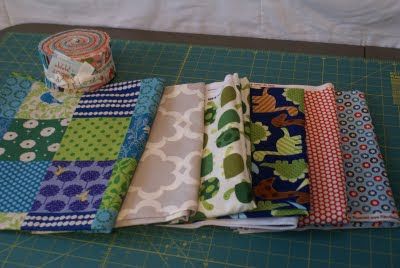 Yesterday I was hit by a massive cold and had to keep myself from napping in order to sleep at night. I occupied myself by pulling fabrics for a secret project: 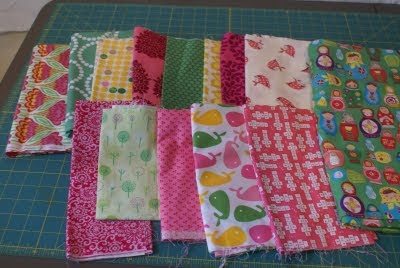 I used the top left fabric as the inspiration for pulling complementary fabrics (it's Anna Maria Horner Garden Party). The fabric on the far right (Maryoshka dolls) will be the backing. Suggestions for simple quilt patterns are more than welcome!!!!
Posted by Dresden Lane at 4:36 PM

Welcome back! Love the fabrics you've selected. My go to suggestion for a simple quilt is the zig zag made with rectangles (not HSTs). Super easy but fun!

Gregory looks taller!
Those pants are so cute. I can't wait to catch up w/you guys -- and see the polka dot quilt in person. It's already looking amazing!!

life on the move said...

Hey Laurie cute pictures! Just wanted to let you know that the boy version of sunbonnet sue was actually made by my Great Aunt Grace who I grew up visiting a lot when I was young. The other quilt was made by my Granda Cook.