To distract you from the boringness of the project I completed last week, I am including some pictures of my son. Better yet, they illustrate the necessity of said project, despite it being mundane. A few weeks ago we allowed Gregory to dive into a small brownie and some ice cream, this is the result. For months, it has been apparent that the bibs I had were just too short. Sure, he'd be clean from about the belly button upwards, but below - sometimes he just needed a new outfit after some meals. I guess I am lucky that he will still tolerate wearing a bib - a lot of kids his age won't. But he is SUCH a messy eater. 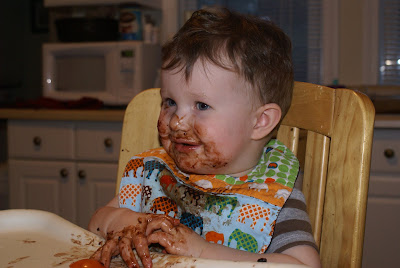 So I made ten super-long bibs - I wanted to kill myself after the third one. Making the same exact thing over and over is just TOO boring. I will never be one of those sewers who cranks out the same thing repeatedly for an etsy shop or craft fair. I have a lot of respect for those who do, don't get me wrong, but it's just not for me. 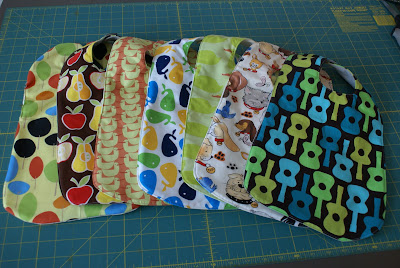 Here's one of the bibs in action. Look at that cow-lick! Watch out Dennis the Menace! His dad has the same thing. 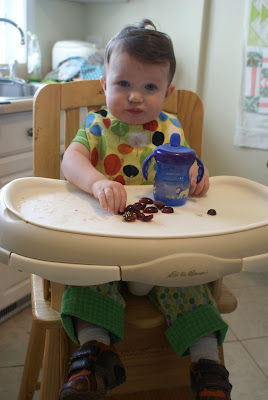 My nephew just started eating rice cereal so I guess it's time I make him some bibs too - I hear you though, repetitive projects can be tedious - I'd be no good at the craft fair thing either! As usual, I love your fabric choices!