Did you hear that Free Spirit is reprinting Flea Market Fancy in January 2011? Last year a petition was started to get the company to reprint - the company initially refused, even with nearly 2000 signatures and prices of yardage repeatedly selling for $40 per yard on ebay. It was released in two segments - beginning about five years ago. Less than two years ago, it's popularity was soaring (probably due to some popular bloggers using it prominently in their projects) - and prices began to rise by resellers. Less than a fat quarter of scraps of "seeds" sold for over $100 on ebay about a month ago. Some people are vowing to buy "bolts" when the re-release hits the market. The mania surrounding this line kind of scares me - and it makes me feel a little uncomfortable to see it growing to be the quilter's "status symbol." But I will admit that I am kind of excited with the prospect of getting more of some of the prints myself. I can't imagine how some people might be feeling if they had bought all of the $10+ fat quarters and now it's coming back to being available at standard prices.

These are a few charm squares I received in a swap that I plan to use this week for a small project. 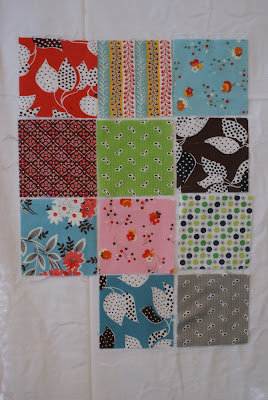 Last week I wrote about buying some DS Joann's fabric and was asked by a friend if I worried about buying fabric from Joann's (due to it's reputation for selling bad qualityfabrics). The answer is: YES. In fact, I am famous for "hating" Joann's by some friends. I guess I have been kind of vocal about my preference for "quilt shop quality" fabric and I always try to encourage beginner quilters to avoid Joann's and Wal-Mart fabrics.

In general, I very rarely buy fabric at Joann's. I usually just go there for batting, thread, and interfacing. But I have to admit that I occasionally buy some fabrics at Joann's: Kona Cotton Solids (there is some debate about whether it is really released by Robert Kaufman to Joann's, but just check out this post), some Alexander Henry can be found in the novelty section, Lisette apparel fabrics (aka Oliver and S), and now the DS collection. I also should mention that occasionally designer fabrics can be found in the fat quarter bundles (Lizzy House, Heather Ross, Denyse Schmidt, Sandi Henderson, etc.) and rolled up fat quarters- all with their selvages cut off. 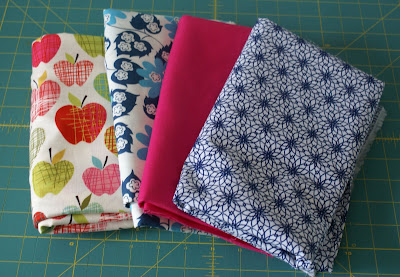 I get really psyched to be able to buy fabrics such as the above with coupons- the apples came to about $4 per yard, the DS was $5, and the Lisette was $3.75. (And no, I don't feel guilty about not "supporting my local quilt store." I do support them sometimes, but I have had plenty of negative experiences with shop owners, can't navigate most of them with a stroller, and get bored of their inventory that never seems to roll over. And don't even get me started about the dearth of modern fabrics available in local brick and mortar's.)

But of course, I have to talk about why 99% of my stash is not purchased at Joann's. I started quilting in high school and used Joann's and Wal-Mart's fabrics exclusively until about 3 years ago (shocking, I know). Sometimes I would hear people say that they "never" buy fabric at Joann's and it came across as elitest/snobby to me. I didn't know why they were so loyal to quilt shop fabrics and assumed that they had money to burn. But in the end, I think you have to make a project out of the chain store fabric in order to really "get" what happens to the quilt over time and why poor quality fabric is not recommended for quilts.
Case in point, here is the quilt that I made my sister for her high school graduation a decade ago(I should add that it's been used everyday since I gave it to her): I don't have swatches of the original fabrics, but I can tell you that the colors have faded tremendously and it only took a couple years before I noticed a drastic change in the color composition. The fabric is also very thin and worn. 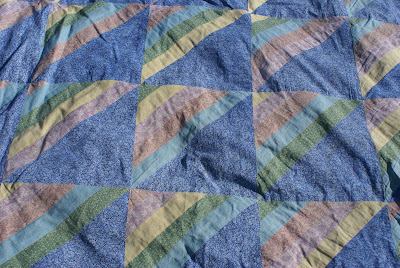 Don't get me wrong, I am thrilled that this quilt has seen so much use and I would die of happiness if Gregory made one of his (four!) quilts go into tatters and shreds by too much use. But there is a difference in general wear-and-tear and materials just not lasting. Quilts take too much time and effort to not see them sustain general usage. 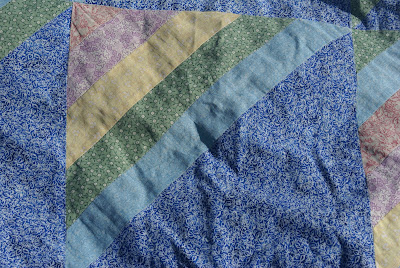 Allow me to end this long post by pointing out that Joann's prices have really rised recently and it's really not all that cheaper to buy their fabric compared to quilt store quality fabrics. If you put a little extra effort into your fabric shoping and get familiarized with online vendors who offer sales, promotions, and free shipping -I am pretty confident you will end up spending less than you would at a chain store.

I was wondering about that Lisette fabric - it seems pretty nice! Thanks for keeping a pulse on this stuff Laurie. You're my go-to when it comes to fabric news! :)

Like Meaghan said...I know to always come to you for fabric-related news, haha. I'm so sad I held onto my FMF. I knew this would happen. Oh well, I only paid $4 for a 1/2 yard. Wanna swap? ;)

Thanks for the late breaking FMF news. I only have a couple of prints (the un-coveted ones) that I got at normal prices. Also, great tip about the fat quarter bundles at JoAnn's - I will be looking more closely. I do regularly see a few Alexander Henry prints, but nothing else yet in fabric. I got a bit of the DS line, but didn't go too crazy. I did use my 50% off coupon to get a really sweet sewing basket covered in Sandi Henderson Meadowsweet prints - there were other ones, too, including Soul Blossoms.