What I Cooked Up Last Week

Yep, my son is back to his pots and pans obsession. Never mind the fun and generous toys he received for Christmas. Who needs that stuff when you can play with a whisk and a rubber scraper? 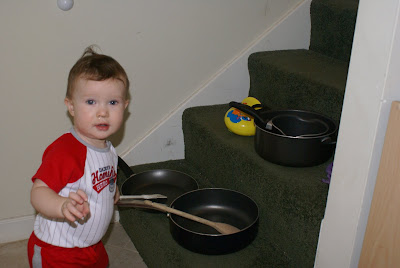 I actually grabbed one of his "toys" to rescue all of my Dresden plates that he enjoyed throwing on the floor. 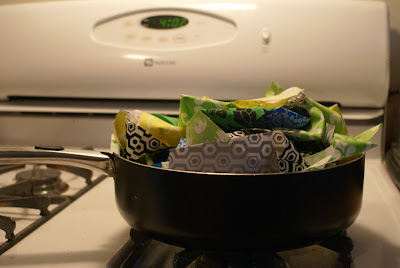 Despite my son's antics and penchant for skipping naps lately, I did accomplish a lot last week. I made roughly 180 dresden plates to go along with an African wax heart print. A very kind woman I met on flickr sent me the blue fabric you see in the left of this picture - it matches pretty well with my color scheme - I will soon be making some dresden plates out of it and then I am going to start to put together my blocks. 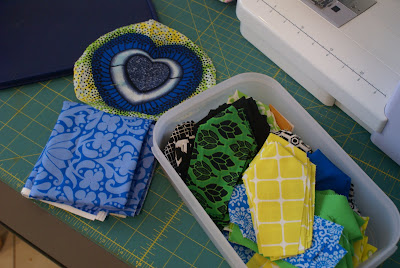 I tackled a UFO and quilted it last night and this morning. I would've finished it last night except part of the back got folded under and quilted into the quilt in a bad way - so I had to spend the last hour with a seam ripper and I learned how to bury threads thanks to You-Tube. 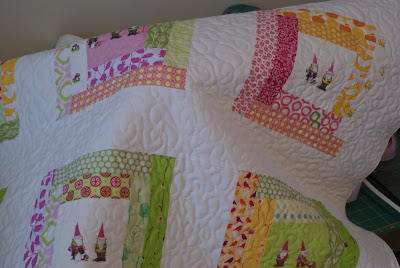 A local friend I have known for ages has repeatedly offered for me to come to her house and help me put together quilt blocks into quilt tops. I had complained to her about my lack of space and my child - two "issues" which really interferes with this step of making a quilt. I had these black/white/yellow quilt blocks sitting on a shelf for maybe two (!) years - so the day before I went to her house I finished them up (they had been framed squares and I had to sew them together in a half-square triangle technique) and I also prepared the blocks I had made for my sister over the summer.
Unfortunately, I wasn't able to get great pictures today and eventually, I just gave up when Gregory was literally hurling a book at me so that I would read to him instead. But here's the black, white, and yellow quilt top - I will show pictures of the AB Love and my sister's green/blue ones later. 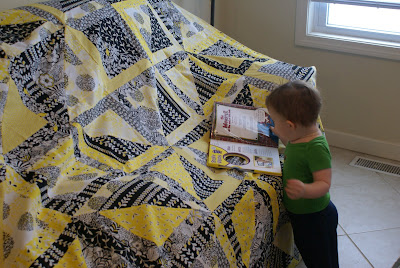 I bought these fabrics ages ago and promptly pre-washed them. That was the last time that I have pre-washed designer fabrics - it's just not necessary and makes the fabrics SO wrinkly and annoying to work with. 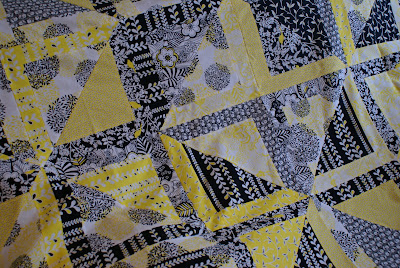 On a "materialistic" note - I used up some bookstore gift cards recently. Deciding on what to get was difficult - there are quite a lot of good options available right now for modern sewing books. The Sew Serendipity book is awesome - it has full size patterns included and seems like it will be useful to the novice clothes-seamstress. I am not gaga for everything in the Bits and Pieces book - but there are a few projects that I have my eye on. 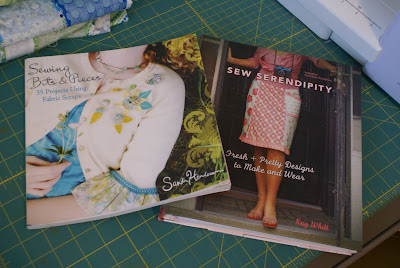 Confession time: Gregory about sent me over the edge yesterday and I indulged in some teensy retail therapy. We had to get out of the house and I headed over to a local traditional store that always sells it's fat quarters for $1.50 on every Monday. I was there for FOREVER because that store is a MESS and impossible to navigate a stroller around - PLUS - I was looking for fabrics that didn't scream "country." I was happy with the older Alexander Henry and Tula Pink fabrics I found - 1.5 yds worth for only $8.50. Am I the only one who buys fabric when they are stressed? 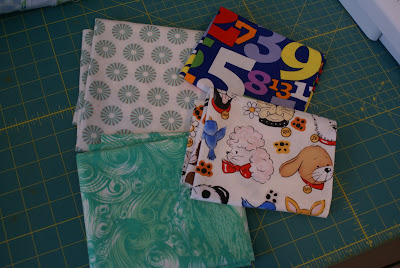 Anyway- three quilt tops assembled, one quilt top quilted, and 180 dresden plates completed - not bad for one week! Despite Gregory's lack of naps - I still squeezed quite a bit in, on the rare times that he did sleep. The only problem is that now my unquilted quilt top number is up to 11 now!
Posted by Dresden Lane at 12:13 PM

Laurie, you are a machine! And your quilting on that HR quilt looks awesome! It wasn't so long ago you were nervous about free motion and now you're so good! I'm impressed at your productivity - you deserved that retail therapy! I do that all the time. I cried in a quilt shop once because I had gone there as a result of too much stress and reached a breaking point among all the bolts. haha.

I buy fabric and felt when I'm sad. Mostly felt, although in the past four months I've really amassed an amazing collection of fabric I have no need for and is probably low quality. At least the felt is really cheap.