Monday night was my last Chelmsford Quilt Guild meeting for the calendar year. I received back 9 blocks from the block exchange. Most everyone followed my instructions but I was disappointed with 4 blocks that will require some seam ripping - one of which requires a major overhaul and one is not even usable. 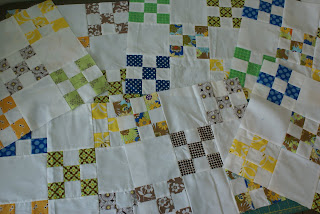 Here are closeups of two of them: 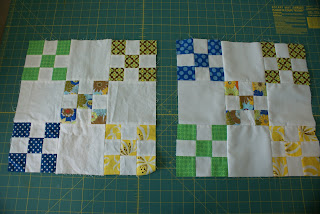 I am debating whether to do this next year. I am not trying to sound ungrateful or like a snob - but participating in this activity is definitely a commitment I am questioning: I have to make a block every month for someone else, using a style of fabrics that I usually don't have. And then to get back my blocks with 4 different significant problems- it makes me feel like maybe I should've just made my own blocks every month. Plus, half the fun of such an activity is to see what kinds of personal fabrics someone might incorporate into my project - but I cannot do that in this guild where everyone's style is so different from my own. So I honestly kind of feel bad making everyone else be a "work-horse" rather than encouraging them to exercise some design/creativity- as the approach I had to take this year was providing my own fabrics and telling people to please not deviate by adding their own country/traditional stuff (some did not do so, hence some of the imminent seam-ripping).
The funny thing is that some people who received the blocks I made for them might be scratching their heads too- as there were a few blocks that I made that definitely had a more modern twist than they were probably expecting.
P.S. FYI- things will be a little quiet around here as we have my husband's graduation from law school this weekend and lots of family coming in and out of town.... I do have a post scheduled next week that will finally showcase the purse I made for my SIL however.
Posted by Dresden Lane at 12:46 PM

Is the second picture the ones that aren't useable? You know, I think that unless you are making local quilting friends, an exchange like that really isn't worth it. Especially when there are so many really great bees on flickr. Are you in any of those?

The second picture has some decent blocks - in the first picture I (accidently) showed one of the blocks that is totally unusable. It's the one where several of the nine-patches are like a cross instead of a "five" on a dice. I haven't tried any of the bees on flickr- but that would be a lot of fun.

I find it so odd that someone would do that to you! I don't know if there's a good answer to the question of whether or not to do swaps...it's just hit-or-miss, I suppose. Although one would expect that if you had to continue looking the recipient in the eye on a monthly basis, you would be inclined to actually make the pattern the person requested!

I feel like there is no need for guilt, whether it is induced by you worrying that the block you made for someone else isn't what they may want or if it's by you thinking you need to stay a part of this group. Haha so, yeah, that's my answer.

Ok- so I forgot that one of the "good blocks" was actually one that I had made to start the whole thing off....thus there were only 4 blocks out of the 8 that were free of error. To have HALF of them come back incorrectly is too much hassle to make it worth it- so no box exchange for me next year!