So last week was INSANE because I couldn't make up my mind on which baby quilt I wanted to give my friend.... So I ended up starting 3 different ones, as you may be able to tell from some of the previous posts. Kind of ironic that I recently lamented having "no time" to sew but soon after that was all I was doing.... The first quilt I attempted turned out to be too big, the second one didn't feel like it would fit the recipient's style.... So last Wednesday night, I made this:

A very simple disappearing nine-patch quilt out of some fat quarters I bought a while ago. The fabrics aren't my typical color pallette, but they are nice and cozy and were well liked by my friend. 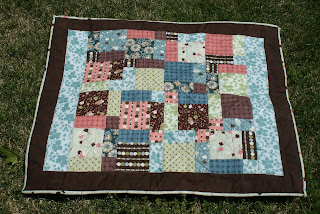 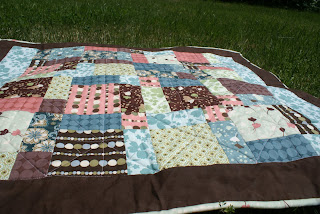 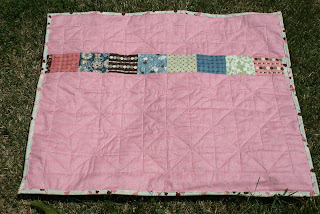 Even though the pattern was so simple and I've done it before... this quilt introduced some new things to me: actually quilting the said quilt and having a pieced back. I was very proud of the results- especially the quilting- which I really just kind of "winged it" (I know that's not a real word). The binding turned out horrendous- but I was way too rushed and it was my fault for trying to hurry it so much.
Sewing for girls IS fun though! Of all of my fabrics, I have the most pink..... I used to make fun of my mom for liking and wearing pink so much - but now I guess I am a hypocrite.
Posted by Dresden Lane at 12:36 PM

I absolutely love this quilt. It really is so cute. The fabric all goes together quite nicely.

Once you go pieced back you never go back! :) I like this quilt a lot. I think I need to try the disappearing 9 patch one of these days...