Hope everyone enjoyed the holidays! We sure did. Baby's first Christmas was so nice- I have never felt so happy and blessed. I love our little family and being a mom is wonderful.

I did manage to get a little sewing done- this is a project I have wanted to do for a long time. One Red Robin is the first craft/sewing blog I came across, thanks to a recommendation from my SIL, and I was dying to make the peg bears posted there. But the blog's author never posted or released the pattern till now. The pattern is in a book I received for Christmas- One Yard Wonders.

I have to say that Gregory LOVES these bears- I have never seen him react so positively to a toy. He's only 12 weeks old, thus I know that his interest in toys is very limited to begin with. But when he saw the one my sister made- he smiled a lot and was fascinated. He later gave it his stamp of approval by trying to eat it. It wasn't till this afternoon that I completed the one I made for him, and he stared at it with great interest for at least 10 minutes. Soon after, he tried to eat it and later begged to take it to bed for his nap as you can see from the pictures below. 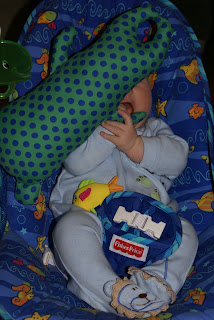 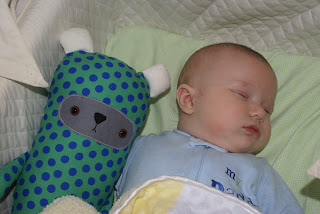 Here is the one Emily made, the bear is stealing a snooze in the bassinet at Grandma and Grandpa Moulton's house. 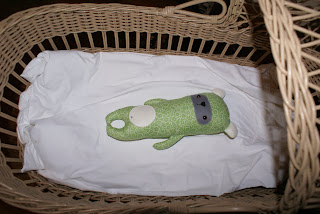 Emily and I made these in just a few hours. Emily isn't big into sewing, but she was a great help in cutting and stuffing the bears- while I did all of the machine sewing. 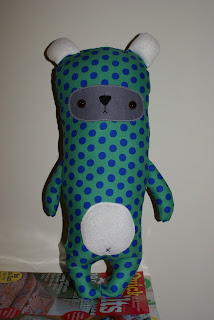 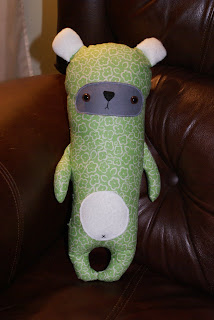 Now, I really like these bears and I think they are adorable, but I can see how they might not appeal to all tastes. I am begging for comments on this question: Peg Bears: Cute or Not Cute? Please weigh in on this crucial matter as I am thinking about making them as gifts for other children but don't want their parents joking that I make terribly ugly stuffed animals that induce nightmares in their children.

P.S. Here's one of the best presents I received that will greatly help in using up lots of fabric: 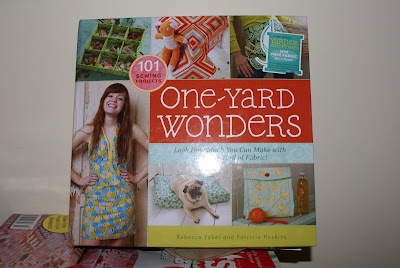 I am really thrilled with how many awesome ideas it has!
Posted by Dresden Lane at 4:39 PM

They're cute... but for some reason I think the belly button is a little akwardly placed. Maybe at the top of the tummy instead???

super cute laurie. i love the photo of gregory asleep with his bear.

I think the peg bears are so adorable! I will say though, NoSurfGirl has a point about the belly buttons.

We LOVE your Peg Bears!! Won't you please share them with our One-Yard Wonder flickr group? http://www.flickr.com/groups/oneyardwonders/ Hope so!

Thanks guys for weighing in. I can see the point about the belly button. I don't know if I really expected that friends would say that they were ugly, even if they truly believed that. And what a treat- to be found by the book's authors!

definitely cute. my kids would love these guys!

I would definitely buy one to give to my baby if I could afford it :) So not lying about it being cute.