What I Am Working on Now

This mess is sitting on my ironing board.... it's about 15 pieces in process of becoming a large tote bag.... One of the first steps had me driving an hour away to my friend's house to get help in interpreting the instructions after hours of frustration with a seam ripper and reading the pattern repeatedly.... I will post when it's done. 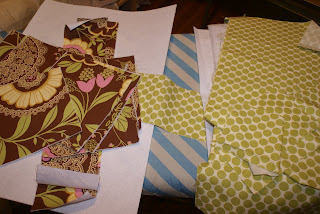 Posted by Dresden Lane at 7:32 PM No comments:

Sorry it's been so long since I posted last. January/February has been BUSY! I haven't been doing a lot of sewing lately- mainly due to the fact that my husband is leaving for a Washington DC internship, so I have been spending more time with him rather than ignoring him while I hide up in my sewing room. I know I will have tons of time to sew (and blog) while he's gone. Joann's had a President's Day weekend sale on interfacing, so I stocked up! I have about 5 projects waiting for me.....
I have had to keep up with the quilt block exchange.... This is the one I had to do for January: (the first picture is of the blocks completed by other members, and the second picture is of the one I completed.) 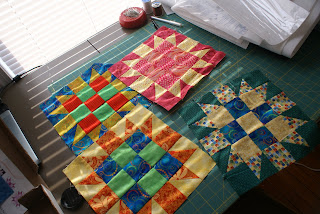 I am pretty happy with the way mine came out. The lady included a handy gadget called "Thangles" that made doing the triangle units QUITE easy to do! 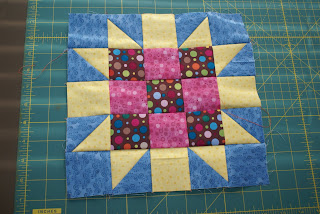 I have been asked to do a sewing group for my church and have recently started it. People aren't as excited about sewing as me, but I think we will have fun. We're going to try and do simple projects together once a month, I will let you know how it goes.
Oh! And as an update to my previous post, Westminster Fabrics withdrew their policy of having a price freeze after I stocked up on a bunch of their stuff. Go figure.

Posted by Dresden Lane at 7:09 PM No comments: